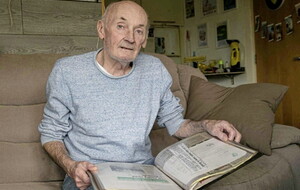 Phillip Gribbon, with brother Fergus and others, hatched a lot to "invade" Rockall

TWO Belfast brothers were clear in their intent – they wanted to start an international incident.

Phillip and Fergus Gribbon planned to “invade” Rockall, seize a plaque placed there by the British after asserting sovereignty in 1955, and plant the Irish tricolour.

It was an audacious plot hatched 30 years ago and Phillip says today he would do the same again if he could.

“Our idea was to create an international incident, put the Irish tri-colour up and hopefully get arrested by the British,” says Phillip, originally from west Belfast now living in the Markets area in the south of the city.

“We were all Irish passport holders so the idea was to bring in the Irish government, which would have opened up the whole thing.”

Three decades on, Rockall, the outcrop in the Atlantic at the centre of much controversy down the years and at least one song, is still the subject of dispute between Ireland and the UK.

Since the EU-UK Brexit withdrawal agreement, the UK, via Marine Scotland, has made clear a zone stretching out 12 miles from the rock is out of bounds to Irish and other fishing crews.

And the Irish Government is accused of failing to defend the interests of its own by effectively ceding control of fishing rights to the British, an assertion disputed by the Taoiseach Michaél Martin.

Successive governments have said that under international law no-one can lay claim to the rock and its environs, neither the British nor the Irish.

“It is outrageous the failure to defend the Irish fishing fleet,” said Padraig MacLochlainn, Sinn Féin’s fisheries and marine spokesperson.

The Donegal TD noted crews out of Greencastle have lost 30 per cent of their income with the enforcement of the 12 mile zone, while those fishing out of Killybegs and as far south as Castletownbere are also affected. Squid is the main catch.

A seafood task force, Navigating Change, estimated the total squid catch around Rockall is valued at around €6.6m in 2019 landings. The total loss is estimated at €7.7 million.

“Britain has no right to bar Irish trawlers from fishing around Rockall,” said Mr MacLochlainn. “It’s extraordinary, not an ounce of credibility in international law.”

Sinn Fein, when or if in government in the future, will “aggressively engage” with the British government to assert the rights of the Irish fishing fleet, he said.

“And it would not be part of other negotiations. It would be front and centre because it is outrageous the failure to defend the irish fishing fleet,” the Donegal TD said, adding that if the British do not budge, it will be taken to international arbitration.

History might have played out a little differently if the Gribbon brothers’ plot had worked. At the time, quite a stir was created prior to the launch date in August 1992.

“We certainly wanted political involvement and would probably have been arrested and taken to Stornaway. We expected to be arrested in and around the rock,” recalls Phillip.

“They would have been aware we were on the rock within a time frame of three days.”

But the Belfast man, who was based part time in Donegal during those years, did admit they might have just been ignored.

On how the plot was hatched, Phillip says it was a coming together of a few minds, the brothers, Joe Logue and Sean Din Friel, both of Fanad.

"We were quite aware of the issues around Rockall, that the British had laid claim to it and the Irish hadn’t," says Phillip. "If it was good enough for British, it was certainly good enough for the Irish. The British could see the value."

After deciding to go ahead, the plotters then had to raise money, for the boat, for supplies and a camera crew to capture the moments.

A blizzard of press coverage followed. The Wolf Tones, who penned the song 'Rock On Rockall' in the seventies, headlined fundraising gigs. SAS veteranTom McClean was called up for a quote and said he was prepared to head for the rock to defend British interests.

Survival expert McClean, an orphan who started life at Bethany Home in Dublin, famously lived on the rock for nearly a month in the eighties.

There were even meetings with a potential corporate sponsor but they did not lead to any funding as the higher ups likely baulked at being involved in any political controversy, says Phillip.

"And there was not a lot of political support. We were a bit disappointed by that," he adds. In the end engine problems and the very short weather window available to make the journey torpedoed the planned high seas adventure.

"We would have to start setting it up all gain, taking us into the next year," explains Phillip, who also was hit by ill health in the months following the planned invasion.

"But I still follow the issues around Rockall very closely. If I could do it tomorrow I would do. it is very much so important Ireland lays claim to Rockall."

Irishman (23) killed while fighting in Ukraine