'Now is the time to build a new country': Irish News readers back border poll 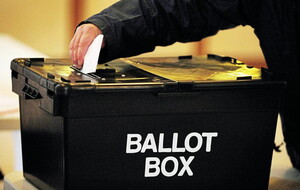 A majority of Irish News readers responding to our survey have said now is the time to hold a referendum on Irish unity. Picture by Rui Vieira/PA Wire.

PRESSURE for a border poll has grown louder in recent years amid uncertainty over Brexit and the loss of a unionist majority at Stormont.

The latest survey on the prospect of a united Ireland gave some encouragement to unionists, as the Irish Times poll found that just 26 per cent of respondents north of the border would vote for unity, compared to 50 per cent in favour of remaining in the UK.

However, with almost one in five in the 'don't know' camp, and a solid majority in the Republic in favour of unity, it appears there is still much to play for.

The Irish News this week asked readers of the website if the time is right to hold a border poll.

The survey prompted a huge response, and found a sizeable majority in favour of putting the question to the electorate now.

Among those backing a border poll being held sooner rather than later, Joseph Donnelly in Co Armagh said the instability of power-sharing in the north made unity a "ticking time bomb", while Derry's Andrew Moore said the island of Ireland would "never heal or truly prosper until the mistake of partition is corrected".

James Smyth in Belfast disagreed with holding a poll now, saying "there is no mandate".

Also disagreeing was Antrim's Paul Jeynes, who said the case for unity "has not been fully articulated".

Jonathan in Newtownards felt the time was not quite right, as "buy-in from all sides must be sought", but suggested a federal-style provincial system post-unity "could allow for an expression of the rich identities and culture within each", adding: "It could create a truly shared island."

In Lisburn, Evan Rowlands said a poll was needed now as "Northern Ireland has run its course", but a debate on what unity would look like is "overdue".

Lee Ruane in Warrenpoint disgreed with holding a poll in the near future as answers are needed first on what the health service and education system would look like in a united Ireland, along with policing.

Belfast's Marc Graham said once answers on those areas were offered, the time would "absolutely" be right for a border poll.

Spanish reader Rodriguez Ivar Bertomeu said a vote was needed because unity is "the only way forward for progression and peace".

In Co Mayo, Mark Haran said a poll was needed now, adding: "It will never be the right time if you ask pro-union people."

Sean Cunningham in Manchester said he did not believe a poll could won if held now.

"Let the full repercussions of Brexit hit, then go for it in five to 10 years," he said.

Belfast's Orla Smith said it was the right time for a border poll because "partition has failed". She added: "Now is the time to build a new country with full EU membership."

Shane Doorish in Co Derry said the "economic opportunities for a united Ireland are stronger than ever before", while Dublin's Coleman Hegarty said the longer we wait for a referendum, "the longer the north suffers".

Meanwhile, Ballymena's Ryan Laverty said now was not the time for such a definitive vote, adding: "Hold off a few years yet."

Co Antrim's Margaret Boyle also warned against a poll just yet, saying: "The preparation must be done so that people will know the advantages and win a unity vote."