Under-investment in NI Water has left the north with creaking wastewater infrastructure that is hindering economic growth. With the threat of domestic water charges back on the agenda, Political Correspondent John Manley asks Stormont's main parties what plans they have for addressing the funding crisis 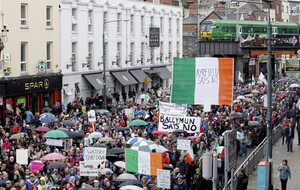 Thousands of protesters take to the streets of Dublin in 2014 to protest against the imposition of water charges. Picture by AP Photo/Peter Morrison

READERS won't need reminding that it rains quite a lot in Ireland. For most of the time, therefore, water is very common.

However, providing fresh drinking water that meets exacting standards and, at the other end, processing sewage, is an expensive operation. According to NI Water, it costs around £500m each year to deliver the regional water services.

In the early days of devolution, when a comparatively more naive Stormont appeared amenable to modernising public services, there was a realistic possibility of charges being introduced for both domestic and non-domestic water users.

The transformation was already underway, largely driven by civil servants, when devolution was suspended in October 2002 following the 'Stormontgate' controversy, so the baton then passed to the British government's direct rule ministers.

NI Water, previously the Water Service within the Department of Regional Development (DRD), subsequently became a so-called go-co (government-owned company) and the roll-out of meters was authorised through legislation, as was the billing intelligence and the accompanying computer system.

At the eleventh hour, however, the tap was turned off. Then secretary of state Peter Hain pulled the plug on the plan following protests from the DUP and Sinn Féin, who at the time were forging an agreement to share power.

We tend to forget how close the north came to introducing domestic water charging – now an accepted practice in Britain and much of Europe, but abandoned in the south after public rebellion.

A commission led by Professor Paddy Hillyard was set up in 2007 and recommended a separate water charge within the rates be introduced but this policy was never adopted.

The current contribution from rates is believed to cover a mere fraction of each household's actual costs.

Charging for around 750,000 non-domestic customers was introduced in 2008 and nets NI Water between £80-90m annually, whereas the cost of every household's water and sewage service is paid to the company via a subsidy from the Department for Infrastructure.

It is one of a number of areas where the north enjoys what's known as 'super parity', whereby we pay significantly less for certain public services compared to our counterparts in Britain.

It's widely acknowledged, however, that NI Water is underfunded at present and that the failure to invest in sewerage infrastructure is leading to economic logjam and increased risk to the natural environment.

Creaking wastewater infrastructure means that at the time of a housing shortage, new developments can't be connected, while there's also growing potential for big manufacturing investments to be thwarted. The Irish News columnist Newton Emerson last week characterised the situation as a "slow-motion economic catastrophe".

NI Water says more than £2bn is needed to redress the underinvestment but in the present economic circumstances and within the current funding paradigm, there appears to be little likelihood that its requirements will be met.

In what looks like region-wide parish pump politics, most of Stormont's parties are vocal in their opposition to domestic water charges but contrastingly muted when it comes to addressing the investment deficit. When Secretary of State Chris Heaton-Harris last week, somewhat facetiously, raised the possibility of introducing water charges, the outcry was universal.

Thousands of protesters take to the streets of Dublin in 2014 to protest against the imposition of water charges. Picture by AP Photo/Peter Morrison

The Irish News subsequently asked each of the parties to set out their policy on domestic water charging and how NI Water's investment requirements could be met.

A Sinn Féin spokesperson reiterated the party's opposition to domestic water charges, stressing that their introduction during what was termed a "inflation crisis" would "only add to the cost of living and the cost of doing business".

"The public are currently already paying for water and other services through the rates system," the spokesperson said, adding that Sinn Féin minister Conor Murphy "stopped the imposition of water charges" when he headed up DRD, with "the full support of executive colleagues".

"It is essential that the executive is restored so that local elected representatives can protect people from this Tory policy," the spokesperson added, offering no clear indication on how underinvestment in wastewater infrastructure could be addressed.

In the aftermath of the secretary of state's remarks, former DUP leader Edwin Poots said he was "not convinced" by the need to introduce domestic water charges.

However, he floated the increasingly popular idea that NI Water be mutualised, making every water user a shareholder, which the former agriculture minister said "would enable them to have borrowing powers they don't currently have".

The DUP at least acknowledges the impending crisis in wastewater, stressing that "without drains there can be no cranes".

The party said it wants to ensure DfI "adopts a more informed and ambitious approach to the next price control", which is post 2027, and advocates exploring the "merits of granting NI Water borrowing powers".

In the past, the Alliance Party has been the sole voice in support domestic water charges – though with the caveat that they be "fair".

North Down MLA Andrew Muir told The Irish News that his party's approach to charges was "based around a neutral impact on households' contributions".

"We want to see mutualisation of NI Water and the current unsustainable funding model of the organisation changed," he said.

"Any standing water charge would open better borrowing terms for investment in our crumbling infrastructure, and the value of this would be offset in terms of a corresponding reduction in household rates."

The SDLP said the party was opposed the introduction of water charges.

"The situation facing the north’s wastewater infrastructure remains severe, however, and is already having an impact on capacity for future development," a spokesperson said.

"As we consistently said during the last assembly mandate – this demands the immediate attention of a functioning executive."

The party highlighted how, without additional resource, the ability to build the new housing "will be totally constrained".

"It remains the position of the SDLP that further hardship cannot be heaped on families struggling to make ends meet and that the executive must prioritise investment in critical infrastructure through means other than domestic charging," the spokesperson said.

"The Ulster Unionists will take decisive action to not only increase water and sewage infrastructure investment but to put NI Water on a sound financial footing to ensure our water and sewage system never again falls into disrepair," a spokesperson said.

"We will change NI Water’s structure to the mutual, not-for-profit model using the existing element of our domestic rating system that nominally pays for water infrastructure to provide a revenue stream and allow for NI Water to borrow against its asset base and make multi-year investment plans."