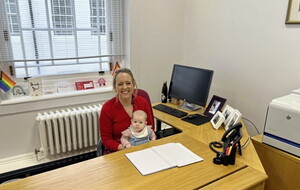 Kate Nicholl pictured at work with her baby daughter Étaín

I wake at 4am because our three-year-old, Cian, has come up with a new excuse as to why he needs to sleep in our bed, and wishes to share it at the top of his voice.

It’s a fitful sleep then until my alarm goes at 7am, but I know I’ll pine for these times in the future even more than I currently do for a good night’s sleep.

Étaín, our breastfeeding six-month-old, also joins us then, and I try to catch up on emails and social media.

The Alliance assembly team WhatsApp always has updates from insomniac colleagues and discussion around the need for reform continues to dominate. We're all deeply frustrated by the current situation.

My husband, Fergal, works from home and will shortly be on a call to India.

Once the kids are dressed and porridge eaten I drop my son at day-care. Étaín has been coming to work with me since she was two weeks old (MLAs aren’t entitled to maternity leave), but will be joining her big brother in the new year.

Read more: Have your say: What does the Legacy Bill offer?

Kate Nicholl pictured at work with her baby daughter Étaín

My first visit is with some constituents concerned about traffic speeding in their street – the current situation is dangerous and I’ll write to the Department for Infrastructure to ask for the introduction of safety measures.

I grab a coffee and catch up with my constituency manager who updates me on our current ‘cases’ (constituents seeking help).

I’m particularly worried about an asylum seeker child who needs a school place.

At noon, we drive to Fane Street Primary School where principal Mrs Cunningham shows me the community support being offered to pupils and their families.

Afterwards I feed and change the baby in the car, but it's lunch on the go as I’m running late for a meeting with the Greater Village Regeneration Trust.

Since becoming an MLA I’ve been busy introducing myself to key groups and discussing how to address issues within the constituency.

I call into my office on the Saintfield Road (recently obtained and opening as soon as I’ve assembled the furniture) to drop off some leaflets.

While I’m there I get a phone call from a constituent about crippling childcare costs.

I signpost them to the ‘Employers for Childcare’ helpline which is a brilliant resource.

When the Assembly gets back up childcare will be a core focus of mine. Its impact on families and on the economy is significant, and it requires proper investment.

I pick our three-year-old up just after 5pm, get home to dinner, play with the kids for a little while and am out the door at 6.30pm for a Greenpeace panel event on which I speak about the link between climate action and the cost of living crisis.

I’m home at 9.45pm and Fergal and I debate whether to watch the new episode of The White Lotus, but we agree it’s far too late, given the sleeping patterns of the little people in the house.

We’re all sound asleep by 11pm.