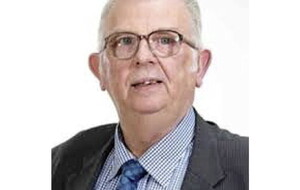 DUP councillor John Carson will not stand in May's local government elections, he has confirmed.

A DUP councillor suspended for making offensive comments about Sinn Féin's Michelle O'Neill has said he will not stand in May's election after being "sacked without explanation" by his party.

Mid and East Antrim councillor John Carson has said it was "very obvious" a replacement for him had been chosen ahead of a meeting with North Antrim MP Ian Paisley Jnr.

Mr Carson, who has been a councillor in Ballymena for 18 years, was vice-chair of the DUP's North Antrim Association for 20 years before being replaced in the role at its recent AGM.

The move follows Mr Carson being suspended as a councillor last October for a period of three months over social media comments he made in April 2022 about Sinn Féin vice president Michelle O'Neill.

The local government commissioner for standards Ian Gordon found the comments "unreasonable and misogynistic" and had breached the code of conduct for councillors.

The watchdog also found his online apology "half-hearted" and "not personal".

Speaking to The Ballymena Guardian newspaper, Mr Carson said that ahead of the AGM, he spoke with Mr Paisley who "suggested that I consider retiring".

He said: "It was very obvious that he had my replacement lined up."

Mr Carson said that following the meeting he was visited by DUP leader Jeffrey Donaldson, who advised him not to put his name forward.

He told the paper he had been "sacked without explanation", adding: "I learned a very harsh lesson on who my true friends really are."

“This has had a profound effect on me, I have been a member of the DUP for 42 years and a councillor for 18 years.

“I have pledged I am not going to get into a war of words over this. I have been sacked without explanation. I have just finished a three-month suspension.”

A DUP spokesperson said the party thanked Mr Carson for his "valuable years of service", adding: "We do not comment on selection processes."

Mr Carson - who previously apologised for claiming the Covid-19 pandemic was God’s punishment for the legalisation of same-sex marriage and abortion in Northern Ireland - made the remark about Mc O'Neill in April last year under a Facebook photo backing Edwin Poots for DUP party leader.

Ms O'Neill said the "misogynistic" remark about her on Facebook formed "part of a nearly acceptable diatribe on social media that people think it's fine to denigrate women".

John Carson said that ahead of the AGM, he spoke with Ian Paisley Jnr who "suggested that I consider retiring"