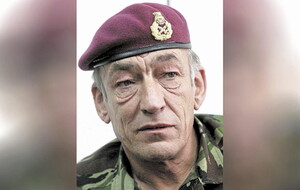 THE leader of the Catholic Church in Ireland has said the treatment of the group known as the Hooded Men was “torture”.

Archbishop of Armagh Eamon Martin last night branded the experience of the 14 innocent Catholic men as "inhumane, degrading and cruel".

The men say they were subjected to state-sanctioned torture when they were interned without trial in 1971.

The techniques included being hooded, made to stand in stress positions, forced to listen to loud static noise and being deprived of sleep, food and water.

In some cases the men were also thrown from helicopters they were told were hundreds of feet in the air despite being just feet from the ground.

In 2021, the Supreme Court ruled that the methods used "would be characterised today" as torture.

Archbishop Martin was speaking after a BBC documentary screened this week examined the disturbing case.

During the programme the former head of the British army, General Mike Jackson, appeared to question whether the treatment of the 14 men amounted to torture.

Mr Jackson was a captain with the Parachute Regiment between 1970-1973 and was posted to the north.

“As to whether or not, in extremis, physical violence on a prisoner of war or a detainee is ever acceptable is a very important question,” he said.

"Torture is illegal. [There is] a very clear convention on the matter. Whether depriving somebody of sleep for two nights, should or should not be illegal, I'm a bit more uncertain."

The former British soldier added he was not in a position to question the “perception” of the Hooded Men.

"This question, can non-violent ill-treatment equal torture, is very philosophical as well as legal,” he said.

"You might be better asking a bishop on such matters."

The ill treatment of the men is said to have been brought to an end after former Archbishop of Armagh, Cardinal Conway, received a smuggled note from one of the victims, Paddy Joe McClean.

Archbishop Martin last night said the treatment of the men amounted to torture.

“At the time of these events my predecessor as Archbishop of Armagh, Cardinal Conway, was in no doubt that the treatment being meted out was humiliating and brutal, and he made this known to the highest authorities,” Archbishop Martin said.

“Today any right thinking person would describe such appalling, inhumane, degrading and cruel actions as torture, with no place in a civilised society.”

“It's disgusting but given his background in Ireland it's absolutely without surprise.”

“I think it is showing that at least some religious people have taken seriously what has gone on in the past to the nationalist population and I welcome the archbishop's unequivocal condemnation of torture and of what happened to us being torture,” he said.

“I would call on other religious bishops to stand up and do the same thing so the torture is condemned outright by everybody in this society.”