Hundreds of ambulance service staff, members of two unions, on strike next Thursday 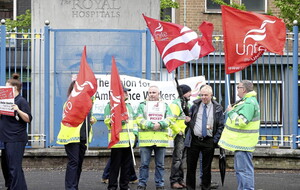 Ambulance staff on strike at the RVH in Belfast Picture Mal McCann.

Unite members of the Northern Ireland Ambulance Service (NIAS) will walk out on five days over the next six weeks.

Both Unite and Unison members will be on strike on Thursday January 26 but further talks will take place to make sure coverage is in place, particularly for any life threatening situations.

Of the approximately 1,300 paramedics, 268 ambulance drivers, call handlers and other transport workers are members of the Unite union. Several hundreds are members of Unison. GMB members will be working as normal on Thursday.

A short meeting between Unite and management was adjourned and the two sides will gather again on Monday, They will work out what coverage the staff, particularly the paramedics and drivers, will still provide if called on during the industrial action.

During recent strikes by ambulance service workers in England and Wales, paramedics and drivers agreed to leave the picket line for category one life threatening emergencies, including cardiac arrests and severe allergic reactions. Category two could be, for example, a stroke or major burns.

Unite workers will walk out on January 26, February 16, 17, 23 and 24 as part of rolling action across the north, England and Wales. In total, ambulance service will be on strike over 10 days.

Members of Unison have been involved in action short of a strike since January 16, which will continue until January 30.

In an interview with the BBC, the union chief said: "People are dying as we speak because of waiting times and the clogging up of the NHS.

“If they don't solve the pay crisis, they can't solve the crisis of the workforce, which means that the NHS is on its knees.”

Ms Graham promised staff will maintain "proper minimum cover because that is something that's really important to us".

"Nobody wants lives to be lost," she said.

The dispute, like the industrial actions across many parts of the public service, is about pay.

Unite and Unison are looking for above inflation pay rises for the year 2022/2023 but most staff have received £1,400, 4.8 per cent on average, the recommendation of the NHS Pay Review Body.

Mr Barclay is reportedly exploring an option to back date the 2023/24 pay offer to January. It normally starts in April.