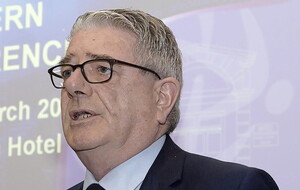 TEACHERS in the largest teaching union in Catholic schools in Northern Ireland are to strike next month.

The Irish National Teachers' Organisation (INTO) told the Irish News it intends to take strike action in February amid the continuing row over pay and conditions.

INTO members are currently engaged in action short of strike, but the union's northern committee, which met over the weekend, said it will now see that "augmented by strike action".

Gerry Murphy, INTO northern secretary, said they would be "announcing in the coming weeks our plans for strike action across the north in conjunction with the other teachers’ unions".

There is speculation that joint strike action by teaching unions in Northern Ireland could take place after the school half-term holidays, possibly the week beginning February 20.

Unions have already been taking part in coordinated action short of strike in schools, which has affected meeting attendance and administrative tasks.

"The action short of strike which members are currently engaged in will now be augmented by strike action. The clear feeling from members is that the employing authorities and DE (Department of Education) are not listening and treating the teaching workforce with contempt.

"Given what INTO members and the entire education workforce sacrificed to keep the system running through the pandemic and the continuing battle to keep the schools functioning in the face of chronic underfunding members have had enough.

"We will be announcing in the coming weeks our plans for strike action across the north in conjunction with the other teachers’ unions.

"This is something we have been very careful to try and avoid but we are left with no option."

Mr Murphy added that "teachers in every sector and across all education phases will withdraw their labour in the expectation that this will finally force a fair offer on pay from those who have the power to avert a strike".

"The five recognised teachers’ unions remain united in their desire to see this dispute settled as soon as is possible and it is still not too late for the employing authorities and the DE to act," he said.

"They should be in doubt that INTO members and their colleagues in the other unions are prepared to strike and won’t be fobbed of with anything less than a fair pay offer that recognises the dire economic circumstances we find ourselves in."

The Department of Education said previously "engagement is currently ongoing" and it "remains committed to resolving issues regarding teachers’ pay through discussion and hopes to find a resolution as soon as possible".