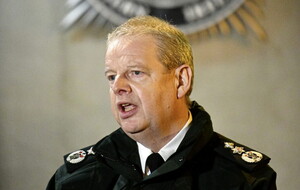 ONE police officer remains under investigation for misconduct in connection with exchanges at a memorial event for the victims of the UDA Sean Graham bookmakers massacre.

Six other officers however investigated by the Police Ombudsman have been cleared of any wrongdoing in connection with the policing of the February 2021 event on the Ormeau Road amid strict Covid-19 rules.

Five people were killed and nine injured when loyalist gunmen opened fire inside the bookies in 1992.

Files on two police officers alleging assault were sent to the Public Prosecution Service (PPS), which decided to take no further action.

However, Ombudsman Marie Anderson began an investigation into the conduct of seven officers at the memorial service, which happened when pandemic restrictions were still in place.

Footage posted on social media showed officers in heated exchanges with those attending, including relatives of the dead.

Mark Sykes, who was injured in the loyalist gun attack was arrested.

It later emerged that Mr Sykes was forced to remain handcuffed in a police car for more than an hour and a half before eventually being released without charge.

Chief Constable Simon Byrne issued an apology to family members, later announcing one officer was suspended and another moved to a different post.

In response to the conclusion of the ombudsman’s investigation, the PSNI said: “The matter remains under consideration.”

The ombudsman’s office said “a file was submitted to the Public Prosecution Service. The file related to two police officers and the PPS subsequently directed that neither officer should be prosecuted.

“The Police Ombudsman then considered the case for potential misconduct. Subsequently six police officers were advised that they would not be subject to any disciplinary or other recommendations.

“However, the Police Ombudsman's Office has submitted a misconduct file to the PSNI's Professional Standards Department containing recommendations relating to one officer. This file remains under consideration by the PSNI.

“The Police Ombudsman has also made three policy recommendations to the PSNI about improvements to policing practice."

In a statement, Police Federation Chair Liam Kelly, said: “One of the officers involved feels he has and is being treated like a pariah and has told me he is actively seeking alternative employment. He feels unsupported and badly let down.

"He contends his character and reputation has been destroyed, making his future career in policing untenable. It is disgraceful that this should be the case.”