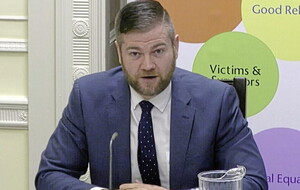 THE Belfast Health Trust has said it is "very concerned" over recent social media comments made about its social workers.

Posts targeting the work of social care staff have appeared on TikTok.

An account on the app has shared several posts, including one viewed almost 15,000 times in three days, criticising social workers and making accusations on their work regarding the welfare of children who have been removed from birth mothers.

Comments under the posts by other app users also attack the work of trust staff.

A post is also calling for a "protest" at Laganside Courts in Belfast city centre this month.

A spokesperson said: "Our social work teams provide a vital service - some working around the clock - to support vulnerable members of the community who have found themselves in very difficult situations. They are dedicated to their role.

"Over the last 10 years there has been a rise in demand for social work services. It is a valued and much needed profession and our social workers are fully and wholeheartedly committed to every child who needs our help to ensure they are living in a safe, stable and loving environment. They often have to make extremely difficult decisions to ensure the safety of vulnerable people and will do everything possible to protect children at risk of harm.

They said the trust "would be keen to hear any concerns about the services provided by our social work teams, adding: " We will always take the opportunity to listen to our service users, address any complaints and find solutions to issues affecting them."

A PSNI spokesperson said police were "aware of comments made online" adding that enquiries "continue".

SDLP MLA Colin McGrath spent a day in 2018 working with the child and family social work team at the South Eastern Heath Trust.

"Sometimes they have to take unpopular decisions, but those are always made against strict criteria that has the very best interests of children in mind," he said.

"There are also many routes for anyone unhappy with any decision to go down, to ensure best practice is being carried out."

He added of social care staff: "They get frustrated with unfair criticism because they aren't immune to the emotional effects of decisions on welfare. They don't want to see families broken up, and when a child is removed I have seen that is is the absolute very last resort, and there could be five or six or more professional eyes on a case before that decision is made.

He added: "I don't accept conspiracy theories that say otherwise, and if anyone has actual fact-based complaints to make, there are routes available to them, including independent agencies who will investigate."