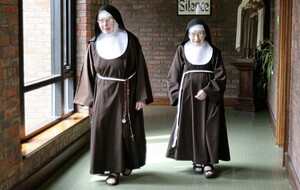 Sr Paschal and Sr. Mary in the corridor of the Poor Clare Monastery, Cliftonville Road, Belfast before its closure in 2012. Picture by Ann McManus

THE death of the last Irish nun to serve at the former Poor Clare's monastery in north Belfast has been called the end of an era.

Sister Mary McGann had been a major part of the Cliftonville Road monastery which closed after nearly 90 Years in 2012.

Following a strict daily routine which had changed little since the contemplative order was founded in the 1200s, the nuns rarely ventured outside the monastery walls.

Despite this, they became a lifeline for many in the community who shared their problems with them during the Troubles.

By 2012, just four nuns remained including Sr Mary, two Filipina nuns and Sr Paschal McMeel from Co Antrim who died in May.

After leaving Belfast, Sr Mary transferred along with Sr Paschal to another Poor Clare's monastery in Carlow.

Suffering from dementia in recent years, Sr Mary passed away in Carlow's District Hospital on Monday.

Mourners were told how her passing marked the “definite death of the Poor Clare's era on the Cliftonville Road in Belfast,” and how she had been "welcomed and loved" in Carlow during her final years.

During a reading, one of those who helped to care for Sr Mary in hospital said she “always had a kind, gentle word and a beautiful smile.”

West Belfast priest Fr Martin McGill has written a book about the Poor Clares in Belfast, which features a picture of Sr Mary on the front cover.

Having visited her in Carlow in her later years, he said Sr Mary's passing marked the end of an important time for many in Belfast.

“She was very much a quiet, gentle, prayerful person. One of the words that are associated with the Poor Clares is contemplative, and that's how she struck me,” he told the Irish News.

“There was a real sense that it was the end of an era when the monastery closed in 2012. It was a very sad day for the people of Belfast who had gotten to know and love the nuns over the years.

“This is another break with the past."

On researching his book, he said: “What really struck me was the number of people who went to the monastery and were able to spend time with the nuns. For example, during the Troubles the amount of people who went there to share what was on their heart. In many ways the nuns wouldn't have considered themselves as counsellors, and yet at the same time they were almost performing that function for some people.”

He added: “The very last thing they would be looking for was publicity. They were part of a closed order and lived behind a wall. Apart from a very limited number of occasions they wouldn't have been outside those walls. But the impression they left on people has been immense.”