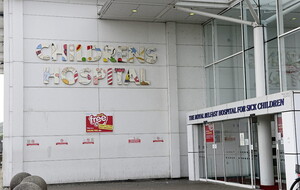 AN extraordinarily high number of children were seen by emergency department staff of a Belfast hospital over a 24 hour period this week after the death of a five-year-old girl following infection with the severe form of the Strep A bacteria.

It was the largest number staff have ever seen in the emergency department in a single day, 40 more than the previous high and far outstripping the very busiest 24 hours pre-Covid when the doctors and nurses would have treated 60-70.

Many of the 227 children brought to the Royal Belfast Hospital for Sick Children yesterday were showing symptoms of bacterial or viral infection.

Parents from across the Belfast Trust area, and beyond, brought their children to the hospital following the death of Belfast girl Stella-Lily McCorkindale after she contracted invasive Strep A.

But the chances of children contracting the invasive form of the bacteria are extremely low, less than one in 100,000, according to figures compiled in England and Wales. Strep A is not a notifiable infection in Northern Ireland so the Public Health Agency does not have numbers.

In a statement, the Belfast Trust said the Children's Hospital "continues to experience very significant pressures" with the number attending the emergency department with symptoms of bacterial and viral infections has increased.

"Unfortunately, we have taken the very difficult decision to postpone all routine procedures...to allow our staff to care for those children with serious or time critical illness at this time.

"We appreciate how difficult this will be for families and children and we apologise for the distress this may cause."

The hospital has seen numbers creep up since the start of the pandemic, with highs being consistently seen by the pressured doctors and nurses.

The trust is encouraging parents to check the online symptom checker on www.belfasttrust.hscni.net or alternatively visit the Public Health Agency website at www.publichealth.hscni.net for advice on managing group A strep infections.

One of the problems facing health professionals, including GPs, is that the increase in Strep A cases normally happens in the spring time rather than winter when there is always an uptick in viral infections.

Symptoms of Strep A include muscle aches, sore throat, flushed cheeks, rashes and skin sores. Those infected with the bacteria can suffer a range of infections, most of them relatively mild, including scarlet fever. A small number will suffer more serious illness when the bacteria invades particular parts of the body, including the blood stream, deep muscle or lungs.

Two of the most severe, but very rare, forms of invasive disease are necrotising fasciitis and streptococcal toxic shock syndrome. None children across the UK have died since September, including Black Mountain PS pupil Stella-Lily.

Stella-Lily, daughter of Robert and Colette, will be laid to rest next Wednesday at Roselawn following a service at her grandmother's home in the Shankill area of Belfast.

"You are our sunshine our only sunshine," the funeral notice read.

Her father Robert told The Irish News he brought the little girl to the children's hospital twice last week only to be told she had a viral infection. He was advised to bring her home and give her paracetamol.

He returned to the emergency room last Wednesday with his still extremely sick daughter the following day. After a short examination, including a chest x-ray, Stella-Lily was rushed to intensive care unit.

After five days in ICU, most of the time in an induced coma and latterly severely brain damaged, the decision was taken to switch off life support, her father said.

“I am just devastated,” Mr McCorkindale said. “I was her best friend. We were best mates. We were like two peas in a pod.”

Friends and family, in tributes, remembered how inseparable the father and daughter were, always to be seen on the road together.

“We loved every minute together walking this road, on our scooter rides or on the bikes,” Mr McCorkindale said.