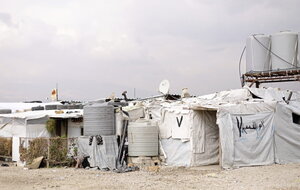 An example of the housing Syrian families are living in. Picture by Hazar Al Zahr

SYRIAN families in Bekaa Valley are at risk of death this winter as temperatures plummet and the conditions in their tented homes deteriorate.

The region is home to some of the 1.5 million Syrian men, women and children, who have fled war and sought sanctuary in neighbouring Lebanon since 2011.

Around 8,000 of them are supported by Trócaire’s grassroots partners on the ground including SAWA (Arabic for together) Development and Aid, and Women Now, a feminist organisation which empowers women through its programmes and support for survivors of gender based violence.

The people in positions of power in Lebanon describe the Syrian refugee camps as ‘informal settlements’ to focus on their temporary nature, but some families have been living in them for 10 years and more.

Concrete blocks (no cement), wood and tarpaulin are the only materials allowed to construct the homes, and they are at risk this winter of nearby rivers flooding, and of collapsing due to rain and snow storms as the harsh weather bites.

An example of the housing Syrian families are living in. Picture by Hazar Al Zahr

To say that living in these tented communities, where an outbreak of cholera has been detected, is challenging, is an understatement.

I was stunned to learn that they have to pay rent for this most basic of accommodation but they do.

Refugees feel unwelcome, and are only allowed to undertake three types of job – agriculture, construction or cleaning – and work, when it's available, is most often limited to men only.

Among those I spoke to was Yassin (40), a wheelchair user, and his wife Nissrin (39) from Qusayr in Syria.

They live in Barelias with their four children aged nine to 18.

They arrived in Lebanon around a decade ago, full of fear, after a painstaking journey from Syria.

Yassin said he recently found out his father and younger brother who were detained in Syria are dead.

He said rent, bills and others costs are difficult to meet as he cannot work because of his injuries and is not currently in receipt of UNHCR UN Refugee Agency financial assistance.

“I've always hoped to be resettled anywhere outside the Arab world via Germany, France, Canada, by UNHCR. Anywhere I could attend and receive the medical care I need. But here I don't have access to any of these opportunities.”

His children go to an informal Kayani school near their home because transport costs to formal school are prohibitive.

“My greatest joy would be to be able to be productive and provide for my health and family and children. Instead of waiting, waiting endlessly for aid. I'd like to make my own bread.

“We have a good relationship and we are very grateful to SAWA and equally any other organisation that comes here and provides any sort of aid and support for people.”

Yassin says his family cannot return to “the literal hell of Syria” and Nissrin said: “The most immediate need we are about to face now is the cold.”

Nadir Fandi (41) and his wife Mariam (39), from Homs, have been living in Lebanon since 2017 and are currently based in Saadnayel with their five children aged 3 to 18.

Devaluation of the currency and inflation means life is even harder now, and there is much less work, plus Nadir has leg injuries.

He said: “There is a huge impact on the mental health of all men, women and children here. When you come back to your home and you didn't bring food to the table, how would you feel?”

Mariam said: “Every day is the same as the one before. But it's only getting more difficult.”

Their daughter Rawan (13), who has often told her parents, ‘I have no love for this life, why and what am I even doing here?’ coughed the whole time we were in their home. She said she wants to be a doctor because they have made her feel better in the past, and she wants to do the same for others. Like some little girls she loves fashion, and beamed when I told her we liked her jeans, among only a handful of items she owns. But unlike other little girls her access to education has been patchy and life opportunities are cruelly limited by circumstance.

She desperately wants and deserves to learn but everything costs money in Lebanon, and the country is mired in crises.

At the nearby Women Now feminist centre, programme director Rola Al Rokbi speaks of Syrians being inspired by the women of Belfast’s feminist struggle, and of the vital work they are doing delivering empowerment, protection, participation and advocacy programmes to those traumatised by suffering.

Child marriage, and financial and sexual exploitation, are just some of the issues staff there are supporting people with.

Women, who are living in basic residential apartments, speak about their mental health struggles and challenges of getting by.

Among them is widowed Mayada Zaza (48) from Damascus. She arrived in Lebanon in 2013 with her six children now aged 12-24.

Mayada tells me she lives in constant fear of exploitation and becoming homeless.

“I don’t cry at all,” she said. “I can’t cry. I feel like I always have to be very strong in front of my children, and this is overwhelming.”

She added: “My dream is just to feel safe.”

:: To support Trócaire’s 2022 Christmas Appeal which helps fund its work in Bekaa and Shatila in Lebanon and elsewhere please visit https://www.trocaire.org or call 0800 912 1200.