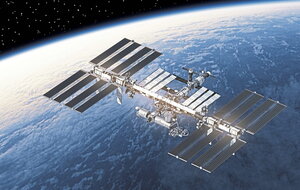 BELFAST-born Rosemary Coogan has spoken of her delight at being chosen to be part of a select group to train as the next generation of European astronauts.

The astrophysicist will begin training next year, with the potential she will be heading into space by 2026.

They will train to fly to the International Space Station (ISS). She should be the first Irish-born person in space when it happens.

Ms Coogan was one of just 17 chosen out of approximately 22,500 applicants to join the European Space Agency’s astronaut training programme. This included 270 from Ireland.

The scientist, born in Belfast and who spent her early years moving between Northern Ireland and the south of England, was officially named as one of the astronauts at an event in Paris two weeks ago.

Ms Coogan described knowing she was given the opportunity to head into space as a “wonderful feeling”.

“As you might have heard it was a quite a long selection process,” she told BBC Radio Ulster. “I am really thrilled to have this opportunity and I cannot wait to get started.”

Always fascinated with space, which led to her building a career as an astrophysicist, “becoming an astronaut gives me the opportunity to contribute to a whole different side of space science”.

“A lot of what they do at the International Space Station is not only to do with space but directed to the materials that we use on earth and the human body,” she said, adding it was “quite a different side” of the science.

It is the first time a new ESA astronaut training programme has started since 2008. This cohort will be eligible to fly from some point in 2026.

“I think it is a really good time to get involved in exploration," she said.

"Of course, the ISS will continue to be fantastic for the next eight or so years (but) “I am really looking forward to the next steps such as assembling the Gateway, the new space station, which will be much closer to the moon."