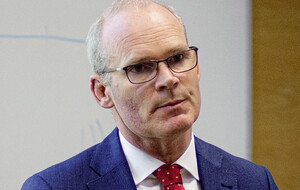 URSULA von der Leyen has spoken of "encouraging" engagement with Rishi Sunak over the protocol but insisted there can be no hard border in Ireland.

The European Commission president was speaking yesterday in Dublin, where she addressed the joint houses of the Oireachtas to mark 50 years since the Republic joined what was then the European Economic Community.

Arriving in the capital yesterday for a two-day visit, Ms von der Leyen said she was "very confident" a solution on the protocol would be found if the British government was willing.

Negotiations are continuing between London and Brussels aimed breaking the deadlock around the post-Brexit trade arrangements.

She told TDs and senators that Brussels' relations with the UK had improved under Mr Sunak.

"I'm glad that today our talks with London are marked by a new, more pragmatic spirit because the European Union and the United Kingdom are still members of the same extended family, even if we no longer live in the same house," she said.

The European Commission president said progress could be made by "applying common sense and focusing on the issues that really matter" in the north.

"We're listening closely to the business and civil society stakeholders in Northern Ireland, but the consequences of Brexit and the kind of Brexit chosen by the UK cannot be removed entirely," she said.

"The solutions we find must ensure that the single market continues to function in Ireland and elsewhere in the European Union."

Ms von der Leyden assured her audience that "Ireland can always count on the European Union to stand by the Good Friday Agreement".

"There can be no hard border on the island of Ireland," she said to applause in the chamber.

Foreign Affairs Minister Simon Coveney echoed the commission president's positivity, saying he believed a "solution is within our grasp".

He said the Republic knew "first-hand the value of European solidarity" throughout the Brexit process.

"The European Commission has never once wavered in its solidarity with Ireland in a union where increasingly we look out for each other," the Fine Gael deputy leader said.

Mr Coveney said he was grateful for the bloc's support for peace in the north and efforts to find solutions to the protocol impasse.

"The United Kingdom is our neighbour – it's our friend and a country that we and the rest of the EU want a deep partnership with as they travel a new journey outside of the European Union," he said.

"I hope that with a new UK prime ,minister, and indeed in new context internationally, we can now grasp the opportunity to resolve our Brexit related differences in the coming weeks through dialogue and compromise."

Sinn Féin president Mary Lou McDonald said the protocol was necessary to protect the north from "the damages inflicted" by Brexit.

Speaking in the Dáil, she said that recent commitments by the British prime minister to restore Stormont were "very, very welcome" but action was needed.

"The people of the north of Ireland voted to remain within the European Union, but were dragged out against their will by Britain spearheaded by the Tories at the DUP's urging," she said.

"The European Union has stood steadfast with Ireland in our determination to protect our peace process and the Good Friday Agreement, a peace agreement which will be 25 years old next year, and which has transformed our island and shown that conflict can end and peace can triumph."