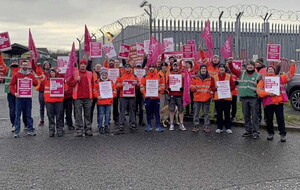 ROYAL Mail workers in Northern Ireland joined thousands across the UK for a second day of strike action today.

Workers in Belfast, Downpatrick, Dungannon, Derry, Antrim, Ballyclare, Crumlin and Portadown were among many posting pictures from the picket line.

An estimated 115,000 from the Communication Workers Union (CWU) joined the protest over pay conditions.

Royal Mail has said it has made a revised offer to workers of up to 9 per cent over 18 months but "no talks are happening".

The CWU is demanding a pay rise in line with inflation, which currently sits at 11.1 per cent.

There is also a dispute over working conditions, such as introducing compulsory Sunday working.

Earlier, Royal Mail CEO Simon Thompson was criticised after footage from a BBC interview appeared to show an aide writing answers on a board for him.

Commenting on Twitter, the RMT Union said: "This just proves that everybody, including Simon Thompson, relies on postal staff to deliver their messages for them."

A statement from Royal Mail said that "well-developed contingency plans" were in place but it was not possible to fully replace frontline services during strike action.

Rathlin Island Ferry Ltd and the Department for Infrastructure are now attempting to reach agreement.

Unite the Union members voted to strike four days a week with an 85 per cent majority after three years of a pay freeze.

Unite General Secretary Sharon Graham said: “The Rathlin Island Ferry employers are on the very eve of taking strike action. Why? Because they haven’t had a pay-rise for three years. They’re caught in a vice between their employers and the cost of living crisis. If necessary, Unite will support our members for as long as it takes."