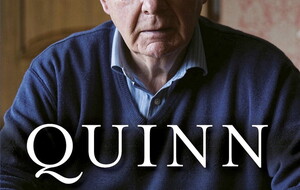 A new book about former business tycoon Sean Quinn reveals the inside story of how the Fermanagh man lost his empire.

Quinn has been penned by well-known Belfast-based journalist and film-maker Trevor Birney.

An Emmy-nominated producer, director and journalist, in 2017 he produced the ground-breaking documentary No Stone Unturned about the murder by of six Catholic men by the UVF at Loughinisland, County Down in 1994.

The PSNI later launched an investigation into the alleged leaking of secret documents and arrested Mr Birney and colleague Barry McCaffrey.

The force later apologised and both journalists were paid significant damages.

Mr Birney has spent the last four years investigating the fall of the Quinn business empire and the launch of his book coincides with the screening of the critically-acclaimed documentary series Quinn Country by RTÉ this week.

Mr Birney, himself a Fermanagh native, secured access to some of those most closely involved in the events that led to the collapse of the Quinn businesses.

The book details the full story of how Mr Quinn, who at one time was Ireland’s richest man, fought to the last to save his life’s work.

He reveals how a group of Fermanagh natives formed a group which took its name from Molly Mountain, close to the Quinn homestead at Teemore.

The Molly Maguires, as they became known, were responsible for a carrying out a series of attacks against those brought in to run Mr Quinn’s companies after he lost them.

Mr Quinn has consistently denied involvement in any attacks or intimidation.

The group, which included local republicans, also took their name from a local woman who opposed English landlords taking Irish land in the 1840s.

The book also recounts claims made by a former RUC officer that border-based crime figure Cyril McGuinness was an MI5 agent.

Known as 'Dublin Jimmy', he is suspected of being involved in the kidnapping and beating of former Quinn executive Kevin Lunney in September 2019.

He died suddenly during a police raid on a property in England around two months after the Lunney assault.

The role of Alan Dukes, the former Fine Gael leader and chair of the Irish Bank Resolution Corporation (IBRC), which took over Anglo Irish in 2011, features prominently.

In a shocking contribution, Mr Dukes suggests people from the border region are predisposed to the use of violence.

“Border people have it in their blood,” he said.

“Because they are living in communities that have, you know, a long history of violence of different kinds, and they’d more easily turn to it than anybody else would, you know.

“And I’m not saying they’re different animals from the rest of us, but whether they have Provo links or B Special links or whatever, you know, it’s something that’s nearer to the way they think than it would be to somebody in south Tipperary or anywhere like that.”

Mr Birney voiced surprise at the views expressed by such a significant figure in Irish political circles.

A border native, with strong links to his tight-knit community and rooted in the GAA, Mr Quinn was never part of the Dublin establishment or its political elite.

“The thing is Sean Quinn had never played the game in Dublin… the relationships between business and politics,” Mr Birney said.

He said that while Mr Quinn had friends in Dublin political circles, who had previously helped him, by the time the Anglo Irish Bank crisis struck they were no longer in place.

“Sean Quinn didn’t realise that the wind had changed and that the people he could have relied on previously to help him were no longer in positions of power,” he said.

“Instead it was people like Alan Dukes who were now calling the shots and they had no sympathy for Sean Quinn.”

The author believes the possibility of hatching a deal between Mr Quinn and Mr Dukes was slim.

The book also delves into details of an agreement between US bondholders, who were owed €1.2 billion, and a Quinn-linked management buyout team.

The bondholders had initially taken control of businesses formerly owned by Mr Quinn and they later faced a campaign of violence.

The consortium, known as the Quinn Business Retention Company (QBRC), eventually reached an agreement with the bondholders, details of which are dealt with in the book.

While the agreement included the takeover of the cement and packaging businesses it excluded the nearby glass factory.

A six-page document, described as an “indicative proposal", obtained by the author, outlined details of the deal.

The glass operation was eventually offloaded and Mr Birnie said it is believed the deal brought £4m-£6m to QBRC.

He adds that is not known “whether they got that money, we don’t know, we haven’t seen any bank accounts, we haven’t seen their accounts showing this money but we know that was their intention”.

“We have gone to each of the eight signatories of that deal and none of them have responded.”

Quinn by Trevor Birnie is published by Merrion Press and available now.