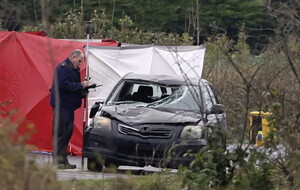 A forensic collision officer at the scene of a road crash at the Ballynacarry Bridge on the N53, Co Monaghan. The collision involved a man and a car

GARDAÍ are investigating a link between the deaths of two men - one who died violently and another found on a cross-border road.

The first body discovered early yesterday was that of a man aged 60 who had suffered apparent stab wounds at his home near Castleblayney, Co Monaghan.

Not long afterwards, another man was killed on the N53 road near Ballynacarry Bridge, close to the border, after he was hit by a car.

It has been reported that officers are following a strong line of enquiry that the two incidents may be connected. They suspect that the second victim may have left the first man's house earlier. It is understood gardaí have also identified the victims and are working to establish any possible connections between them.

A relative of the first victim discovered him at around 6.30am on Thursday. It is understood he died after a violent attack and there was no sign of a burglary. The house in the Knockreagh Lower, Broomfield area, last night remained a crime scene and was sealed off for forensic examination.

A Garda spokesperson said the body was removed ahead of a post-mortem at Our Lady of Lourdes Hospital this morning by Dr Linda Mulligan from the Office of the State Pathologist. Gardaí said the results would "determine the course of the investigation". They said investigations remained "ongoing" and appealed for anyone who was in the Broomfield area between 5 and 6.45am to contact them.

It has also been reported that another man had been in the house when the victim's relative arrived, was confronted, and fled. Officers are working to establish whether this was the same man who was killed a short time later at Ballynacarry Bridge on the N53. Gardaí said that man, who was aged in his late thirties, had been struck by a vehicle and was pronounced dead at the scene.

The N53, which is the main road between Castleblayney and Dundalk, becomes the Concession Road in a section that cuts through part of south Armagh. The road was closed for a time yesterday on both sides of the border for a technical examination, but later reopened.

A Garda spokesperson said yesterday: "Any road users who were travelling in the vicinity of the N53, Castleblayney to Dundalk Road this morning and who have may camera footage, including dash-cam, are asked to make it available to gardaí." A post-mortem on the deceased is due to take place today at Our Lady of Lourdes Hospital in Drogheda by Dr Margot Bolster of the Office of the State Pathologist.