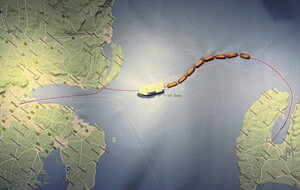 The Brexit Sausage exhibition by artist Shiro Masuyama at the Cultúrlann in west Belfast.

A NEW art exhibition in west Belfast has explored the strange link between Brexit, national identity and sausages.

The "social intervention" features giant sculptures of sausages as well as illustrations of a boat trailing sausage-shaped buoys from Great Britain to Northern Ireland.

If the project seems odd, it is worth remembering the inspiration comes from a media furore over a potential "sausage war" between the UK and EU as well as multiple photo shoots featuring the former British Prime Minister Boris Johnson and the DUP's Sammy Wilson defiantly brandishing raw sausages.

At the time, concerns were widely reported that the Brexit trade arrangements would affect imports of chilled meats into Northern Ireland.

While anxieties over sausage imports have now subsided, the DUP's ongoing refusal to form an Executive over the Northern Ireland protocol remains a bitterly divisive issue.

Before moving to Belfast, Masuyama has held international residencies in the Irish Museum of Modern Art and Flax Art Studios.

Previewing the new exhibition, a Cultúrlann programme says of Masuyama: "As a Japanese artist who has settled in Belfast, he's in a unique position to question how identity can be influenced by the dominant political forces surrounding us".