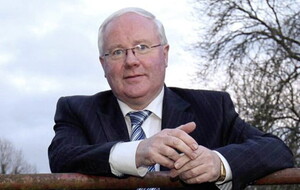 FORMER Fine Gael leader Alan Dukes has described his phrasing of comments about people living in the border region as “ill chosen”.

Mr Dukes, one-time chair of the Irish Bank Resolution Corporation (IBRC) which took over Anglo Irish Bank in 2011, had claimed that people living in border communities have violence "in their blood".

They “have a long history of violence of different kinds and they will more easily turn to it than anybody else will,” he said.

The comments, broadcast in the documentary Quinn Country, attracted strong criticism from border representatives, including Cavan-Monaghan TD Brendan Smith who described the remarks as “outrageous”.

SDLP West Tyrone MLA Daniel McCrossan said he welcomed Mr Dukes's description of the words as "ill chosen" but added that he needs to fully withdraw the remarks.

"These comments were extremely offensive to everyone living in border areas and bear no resemblance to what actually took place in these communities during our troubled past," Mr McCrossan said.

“Alan Dukes would do well to remember that the vast majority of people living in border areas were appalled by the abhorrent violence that plagued their lives and refused to be drawn into it.

"To demonise people who suffered greatly during this period is completely unacceptable."

In an interview on RTÉ on Thursday, Mr Dukes said: “I shouldn't have said it in the way that I said.

"What I meant to convey was that the protests that were there, and the emotion that was there, were seized upon by people who are violent, and who carried out acts of sabotage and despicable personal violence against people."

The “phrasing was completely... It was ill chosen”, Mr Dukes said.

In the programme, Mr Dukes added: “I am not saying they are different animals than the rest of us but whether they have Provo links or B-Special links... it’s something nearer to the way they think than it would be to somebody in south Tipperary or somewhere like that".

Fianna Fail TD Mr Smith, a former Justice Minister, told the Irish Independent the remarks were “outrageous” and “completely dismissive of the overwhelming majority of decent people” in the border counties.

The majority “abhor violence of any kind and stood against it over decades”.

Mr Smith added: “Those of us living in border communities were also victims of violence throughout the Troubles. Our communities have been victims of intimidation and threatening behaviour from a small minority of criminals.”

In a statement, he said: "Alan Dukes’s comments about our community were completely unacceptable and he should withdraw and apologise for them immediately. The fact that he has doubled down on his comments today is indicative of prevalent attitudes, particularly within some sections of Fine Gael.

"Our communities are no different to any other on this island - we want to live in peace and we want a policing service that is adequately resourced and rooted in the community."