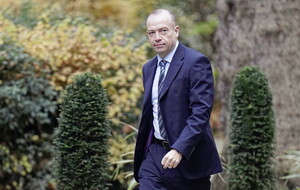 Secretary of State Chris Heaton-Harris arriving in Downing Street yesterday ahead of a Cabinet meeting. Picture by James Manning/PA Wire

THE BILL enabling the secretary of state to slash MLAs' salaries yesterday progressed through the House of Commons unopposed.

The legislation, introduced due to the DUP's continued power-sharing boycott, also extends the deadline for forming a Stormont executive and gives civil servants greater decision-making powers.

Chris Heaton-Harris said it is "not acceptable" that MLAs continued to draw full salaries during a cost-of-living crisis.

"At a time when taxpayers' money, and indeed taxpayers themselves, are under enormous strain, it's simply not acceptable that MLAs continue to draw a full salary whilst unable to conduct the full range of functions for which they were elected," he said.

Mr Heaton-Harris said the bill would also address the "governance gap" that had emerged since caretaker ministers left their posts at the end of October.

Sinn Féin first minister designate Michelle O'Neill challenged the secretary of state to do more to restore the Stormont institutions.

Speaking in Co Tyrone, she said no legislation was a substitute for a fully-functioning executive.

She said Mr Heaton Harris had a number of questions that he needed to answer.

"He bought time, he prolonged the period in which he can call an election, for what purpose?" she said.

While the DUP did not vote against the bill at Westminster, Gregory Campbell argued that the British government should introduce "something similar" in the House of Commons to ensure "Sinn Féin MPs or anyone else that doesn't fulfil their duties also don't receive remuneration from the public purse".

Intervening, Mr Heaton-Harris asked him whether he was aware that Sinn Féin MPs do not actually receive their parliamentary salaries.

Mr Campbell replied: "I am well aware of that and the remuneration I was talking about did not include salaries but included all other expenses, including representation monies, all other expenses, and the total amount in the last 10 years was in excess of £10 million for not performing their public duties."

DUP leader Sir Jeffrey Donaldson said he was "not prepared to nominate ministers to an executive where a unionist minister is required to implement a protocol that every day harms our place in the UK".

"The DUP wants to be back in a functioning executive, wants to be dealing with the issues that matter to our constituents," the Lagan Valley MP said.

"I made absolutely clear that we would not nominate ministers to an executive until decisive action had been taken to address the difficulties created by the Northern Ireland Protocol."

SDLP MP Claire Hanna warned that people were beginning to "look clearly at their options" for the future governance.

"People in Northern Ireland know that our future is not fixed – they know that the experience we're having right now does not have to be the experience we have forever, and people are beginning to look clearly up their options," she said.

"They see the Stormont dysfunction, they see the merry-go-round here, and they're able to see a very clear contrast with the government in the rest of the island of Ireland that is stable, that is delivering a budgetary surplus, that can mean investment in public services."