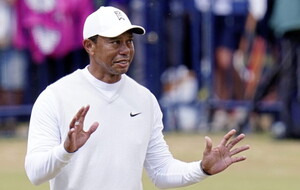 GOLFER Rory McIlroy has revealed that he believes he gave Tiger Woods coronavirus on a trip to Adare Manor in Limerick.

The world number one golfer said they both took ill during the JP McManus pro-am event in Adare in July, just ahead of The Open at St Andrews later that month.

The Holywood sportsman described thinking at the time: "I’ve just given Tiger Covid! This is horrendous".

In an interview with Paul Kimmage, McIlroy has been looking back at the past three years of his career, including his Open and Ryder Cup heartache. During the discussions, he revealed how he and Woods both tested positive for Covid-19 during his trip to the Republic.

"Tiger needed a rest on Wednesday. We had played two days of golf at Adare and the plan was to play Ballybunion (in Co Kerry) on Thursday," he said.

"I woke up that morning feeling a bit achy but didn’t really think anything of it.

"JP gave us his chopper and we went down with Seán and Tiger’s manager, Rob [McNamara].

"We got around fine, flew back to Adare for lunch and as I’m getting up from the table, I’m sore and stiff and super tired.

"I said to Erica (his wife), 'I’m feeling a bit weird. I’m just going upstairs to lie down for a bit'.

"I slept for maybe two hours and the sweat was just pouring off me, then Erica took my temperature and it was sky high. I rang Tiger: 'I’m not feeling so good here'.

"So we both had Covid going into the Open."

McIlroy said he "ended up quarantining at Adare, and it probably took me until the Sunday to start feeling better".

"If it had happened last year, with everything that was going on in my game, I would have been in a panic, but I was in a good place and thought, 'I’ll be fine'," he said.

"On Tuesday night I went to the Champions Dinner and it was lovely. I was sitting there drinking water and they poured a glass of wine, a lovely 2005 Bordeaux, and I was like, 'ahh, I’ll just have a little sip,’ but I couldn’t taste it.

"The whole week of the Open I didn’t have any taste, and everything smelled like vinegar to me. Everything. It was really strange."