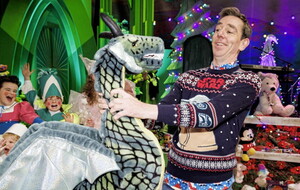 Around €3.5 million was raised for charity by Late Late Toy Show viewers. Picture by Andres Poveda/RTÉ

AROUND €3.5 million was raised for charity during RTÉ's annual Christmas toy show extravaganza.

The broadcaster revealed the amount after the Late Late Toy Show was televised on Friday night.

As of Saturday evening, the total raised so far had reached €3,500,370. RTÉ will later reveal which charities will benefit from the money raised.

Hosted by Ryan Tubridy, the theme of this year's Late Late Toy Show was The Wizard of Oz with viewers following the yellow brick road.

RTÉ said "escapism, love, courage, friendship and unity" were the key undertones of this year's show, which featured more than 200 young performers and toy testers from across the island of Ireland.

Better known as Caillín Joe, the 14-year-old from Creggan, near Omagh, was chosen from more than 7,000 applicants to perform to millions of viewers watching this year's Late Late Toy Show.

As the programme finished on Friday, Turbidy told viewers: "I hope you had a great Toy Show night. And remember: it's all about kindness, joy, love and fun.

"Mind yourselves, mind each other."