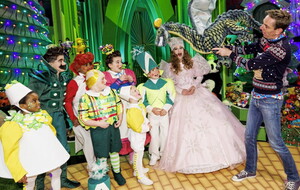 Caillín McDonald, from Creggan, near Omagh, was chosen from more than 7,000 applicants to perform to millions of viewers watching this year's Late Late Toy Show.

Better known as Caillín Joe, the 14-year-old has been applying to perform on the show since he was aged just nine.

Writing on his Facebook page ahead of the show, the singer, who is a student at Dean Maguirc College in Carrickmore, said he was "delighted to announce that I'll be performing on this years"

Hosted by Ryan Tubridy, the theme of this year's Late Late Toy Show was The Wizard of Oz with viewers following the yellow brick road.

RTÉ said "escapism, love, courage, friendship and unity" were the key undertones of this year's show, which featured more than 200 young performers and toy testers from across the island of Ireland.

Speaking ahead of the programme last night, Mr Turbidy said he couldn't remember "the last time I was this excited for the Toy Show".

"It is the thing that is close to the hearts of everyone who will be watching," he said.

"Every age group, every generation, people will know from every walk of life where exactly we are going when we see the set up on Friday night.

"I promised we will be going home.