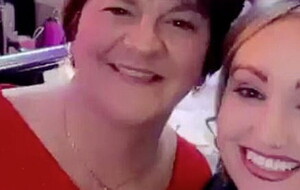 Arlene Foster pictured with Sinead Murtagh, who posted a video chanting 'Up the Ra' at an awards event in Belfast.

A WOMAN at the centre of a viral video controversy involving the former DUP leader Arlene Foster has taken a leave of absence from her role at a Co Armagh school.

Sinead Murtagh from Crossmaglen was named this week several days after she had approached Dame Arlene for a selfie at a business awards event in the Europa Hotel.

A video was later posted online where she chanted “Up the Ra”.

The clip caused outrage as the former first minister’s father was nearly murdered by the IRA in 1979 and a school bus she was travelling on was targeted by an IRA bomb attack in 1988.

Ms Murtagh has yet to comment in public on the matter but it has emerged she has previously volunteered with St Paul’s High School in Bessbrook as a counsellor.

A statement from the school read: “St Paul’s High School is aware of an incident which occurred on social media and are following proper procedures. The female in question had engaged with the school in a voluntary capacity. However due to recent circumstances has requested a period of personal leave and the school are supporting her in this decision.

The Council for Catholic Maintained Schools, the managing authority for teaching staff, said it was unable to comment as Ms Murtagh is not employed by the body.

Since Ms Murtagh’s name was made public, she has also faced a backlash on social media with many criticising her behaviour. A large number have also directed abusive and misogynistic comments towards her.

Earlier this week, Dame Arlene claimed that sectarian incidents had become normalised and pointed towards comments made by Sinn Féin’s Michelle O’Neill during the summer, who said there was “no alternative” to the IRA’s armed campaign.

In response, Ms O’Neill urged people to act in a civil manner in public discourse.

Dame Arlene has issued an invitation to Ms Murtagh to meet with her to visit a graveyard in Co Fermanagh in order to see how many lives the IRA has impacted.

SDLP MLA Justin McNulty last night said while Ms Murtagh had made "a terrible mistake" he did not think it was helpful for anyone to be personally attacking her.

"If given the chance to revisit the event I am sure she would not repeat her behaviour," he said.

"The fact of the matter is that the concerted effort over a generation by political leaders to normalise, and indeed eulogise, the actions of the IRA has created the atmosphere where some people think it’s appropriate to adulate the IRA through these chants. The burden of responsibility for these incidents does not lie with the young woman in the video, it lies squarely at the feet of political leaders who glorify IRA violence at every available opportunity. And, it is hard to reconcile that those same political leaders were quick to admonish the young woman.

"My hope is that there can be contact and reconciliation between Arlene Foster and the young woman in the video so that they can put this episode behind them."

Man dies after being struck by lorry in Waringstown, Co Down