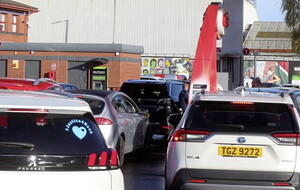 TRAFFIC chaos was seen around petrol forecourts yesterday as a fuel company slashed prices for the day.

Long and disruptive queues were reported outside Go stations in areas including Ballynahinch, Portadown, Ballymena as well at several pumps in Belfast.

As part the Thanksgiving Thursday deal, Go reduced prices to 131.9p per litre of petrol and 1.55 per litre of diesel. This is significantly lower than the current average fuel price in Northern Ireland, listed by the Consumer Council on November 24 as 158.8p per litre for petrol and 180.4p for diesel.

Following a surge in petrol prices this year, the average price peaked in early July at 189.9p per litre of petrol and 197.2p per litre for diesel. Although prices are now on a downward trend, Steve Gooding from the RAC Foundation warned that diesel prices are likely to rise again.

The impact on diesel supplies from the war in Ukraine is also being compounded during the winter months.

Next year, Mr Gooding said things "could get worse" once the European Union's ban on importing Russian oil products come into force on February 5 and stock will need to be purchased from further afield.

Last week, the Office for Budget Responsibility said that a “planned 23 per cent increase” in fuel duty in March 2023 will add around 12p per litre to pump prices.

This is based on the scheduled end of the 5p cut in duty and a long-standing policy of duty rising in line with the RPI rate of inflation..