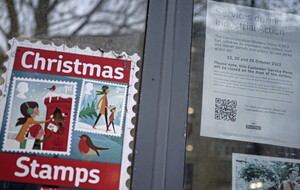 A sign on a door advising on reduced services due to industrial action from the Communication Workers Union. Picture by Yui Mok/PA Wire

The action by members of the University and College Union (UCU), which represents lecturers and support staff, is over pay, workloads and pensions.

The union said up to 150 universities across the UK were affected by the action, with the strike expected to be the "biggest in the history of higher education".

A further day of action is set to take place today and next Wednesday with The Open University, which has thousands of students in Northern Ireland, also affected.

The union said that since 2009 staff pay has been cut in real terms by more than 25 per cent, while the pensions of university workers have been slashed this year by an average of 35 per cent.

"They have had enough of falling pay, pension cuts and gig-economy working conditions - all whilst vice-chancellors enjoy lottery win salaries and live it up in their grace and favour mansions.

"Staff are burnt out, but they are fighting back and they will bring the whole sector to a standstill. Vice-chancellors only have themselves to blame.

"Their woeful leadership has led to the biggest vote for strike action ever in our sector."

"The struggles we face as students are inextricably linked to the reasons that staff are striking," she said.

"High rents, astronomical international student fees, and cuts to maintenance support have happened for the same reasons that staff are suffering under huge workloads - the failed marketisation of the sector which has put profit above staff and student well-being."

Picket lines were also mounted outside Royal Mail centres across the north yesterday as thousands of workers went on strike in a dispute over pay, jobs and conditions.

Members of the Communication Workers Union began the fresh 48-hour strike and warned that postal workers will "fight as long as it takes" with further strikes possible.