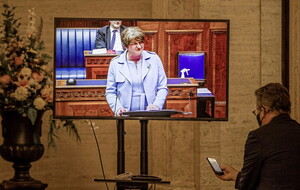 Dame Arlene, who left Stormont politics last year after being ousted as leader of the DUP, takes the title Baroness Foster of Aghadrumsee.

The GB News presenter will sit as a non-affiliated peer.

Aghadrumsee – from Irish Achadh Dhruim Saileach, meaning 'field of the ridge of sallows' – is a small village in south-eastern Co Fermanagh.

Situated in both the Catholic and Church of Ireland dioceses of Clogher, the parish of Aghadrumsee straddles the border town of Clones.

The former DUP leader was raised in the townland of Dernawilt, on the outskirts of Aghadrumsee. When she was aged nine, her family moved to a housing estate in nearby Lisnaskea, after an IRA attack on the family home.

Dame Arlene who previously practised as a solicitor, had been a member of the Stormont assembly since 2003.

Taking her place among peers yesterday, she wore the traditional scarlet robes for the short introduction ceremony in the upper chamber, where she swore the oath of allegiance to the king.

She was flanked by her supporters, former deputy DUP leader Lord Dodds of Duncairn and Tory peer Lord Godson of Thorney Island.