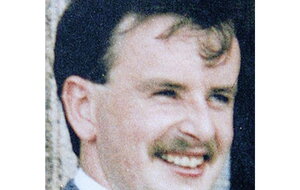 A former soldier has been found guilty of killing Aidan McAnespie at a British Army checkpoint in Northern Ireland more than 30 years ago.

David Jonathan Holden, 53, who had been on trial at Belfast Crown Court accused of the manslaughter of Aidan McAnespie in February 1988, is the first veteran to be convicted of a historical offence in Northern Ireland since the Good Friday Agreement.

Mr McAnespie, 23, was killed in Aughnacloy, Co Tyrone, moments after walking through a border security checkpoint.

He was on his way to a local Gaelic Athletic Association club when he was shot in the back.

Holden had admitted firing the shot which killed Mr McAnespie but had said he had fired the weapon by accident because his hands were wet.

But trial judge Mr Justice O’Hara said he was satisfied beyond reasonable doubt that Holden was guilty of manslaughter by gross negligence.

He found that Holden had pointed a machine gun at McAnespie and pulled the trigger, while assuming the gun was not cocked.

He said: “That assumption should not have been made.”

The family of Aidan McAnespie react to the verdict:

He also said the former soldier had given a “deliberately false account” of what happened.

The judge said: “The question for me is this – just how culpable is the defendant in the circumstances of this case?

“In my judgment he is beyond any reasonable doubt criminally culpable.”

The judge said the weapon controlled by Holden was “lethal in the extreme”.

He added: “It is suggested on his behalf that it was not exceptionally bad or reprehensible for him to assume that the weapon was not cocked. I fundamentally disagree.

“In my judgment this was the ultimate ‘take no chances’ situation because the risk of disaster was so great.

“The defendant should have appreciated at the moment he pulled the trigger that if the gun was cocked deadly consequences might follow.

“That is not something which is only apparent with hindsight.

“The defendant took an enormous risk for no reason in circumstances where he was under no pressure and in no danger.

“In light of the foregoing I find the defendant guilty of the manslaughter of Aidan McAnespie by gross negligence.”

Holden is a former Grenadier guardsman from England, whose address in court documents was given as c/o Chancery House, Victoria Street, Belfast.

The case was heard in a Diplock format without a jury sitting.

Supporters of Holden gathered outside the court each day the trial sat.

The trial proceeded amid continuing controversy over government plans to deal with Northern Ireland’s troubled past.

The Northern Ireland Troubles (Legacy and Reconciliation) Bill proposals provide an effective amnesty for those suspected of killings during the conflict, if they agree to co-operate with a new body, known as the Independent Commission for Reconciliation and Information Recovery (Icrir).

The Holden case is one of a series of high-profile prosecutions of veterans that have been pursued in Northern Ireland in recent years.

Relatives of Aidan McAnespie arrive at court to hear the verdict in the trial of a former soldier David Holden who is charged with manslaughter in relation to his killing in 1988 at a border crossing in Co Tyrone @irish_news pic.twitter.com/i7Y8tLEg1a

Outside court Aidan McAnespie’s brother Sean became emotional as he recalled family members who had not lived to hear the judgment.

“We waited 34 years, we never thought we would have got it,” he said.

“I’m thinking of my father and my mother that prayed and prayed for this day, and they’re not here to see it.

“As a family we’re very relieved and happy. We’ve such a big family, cousins, community and relations to help us through this, it took the whole lot to get us over the line.”

Brian Gormley, a cousin of Aidan McAnespie, said: “We welcome today’s ruling from Justice O’Hara, it’s a day of mixed emotions for the family.

“We’re thinking primarily of Aidan, of Eilish (his sister) who, for the first 20 years of the campaign led the charge – and probably at the cost of her own health – we think of Lizzie (his mother) and John (his father),” he said.

“Some people will wonder why do families persist for 34 years following cases this old. Well it’s very clear: John – Aidan’s father – the day that the PPS announced that David Holden was going to be prosecuted, said the only demand he had is that he hears the truth, because as a family we did not believe the version of events that David Holden or the British government put out at the time of Aidan’s shooting.

“I think we have been corroborated in terms of Justice O’Hara’s ruling today.”

Darragh Mackin, lawyer for the family of Aidan McAnespie, said the verdict at Belfast Crown Court would give hope to all victims’ families.

He said: “We welcome the decision of Mr Justice O’Hara to convict David Holden in the Crown Court today.

“Since 1988 the family have persevered in trying to seek justice against the British Army and Mr Holden for the manslaughter of Aidan McAnespie.

“We welcome this decision which gives all victims’ families here hope that the courts remain open to families seeking justice.”

Speaking outside court, Paul Young, national spokesman for the Northern Ireland Veterans Movement, said he was saddened by the verdict.

“Veterans will be deeply disappointed by this verdict, I’m saddened by it, but it’s not over for David yet because his team, as far as I’m aware, are going to appeal the decision, and I think eventually, if necessary, go to the Supreme Court,” he said.

“I understand that the family are going to feel completely different to us veterans, and they will have their time to say what they say.

“But for us the witch hunt continues, that’s why we support this legacy Bill that is going through Parliament right now which will stop any further prosecutions of veterans that have been previously investigated.

“The terrorists have effectively got an amnesty … with letters of comfort, royal pardons.

“This witch hunt continues but that’s why we’re hopeful that the Bill that is going through Parliament will get passed into law next year.”