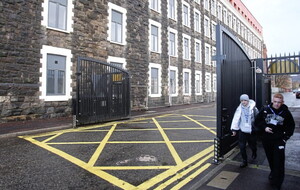 The security gates were installed in the 1980s. Picture by Mal McCann

SECURITY gates at a north Belfast interface were opened to traffic yesterday for the first time in almost four decades.

The Flax Street gates were installed in the 1980s following a series of attacks during the Troubles.

But the gates will now be open daily from 6.30am to 6.30pm, a move which has been described as a "benefit to the local community".

Sinn Féin MLA Gerry Kelly was among those who gathered at the gates as they opened yesterday.

In a post on Twitter, he said: "At 6.30 this morning we had the pleasure of seeing the the Flax Street gates open to traffic after nearly 40 years.

"A substantial move for the regeneration of the area, led by the community and those who have worked cross community on this for decades. Well done."

"Great also to see a new housing development and more retail for the area also," he said.

"Well done to the community organisations and residents for their hard work to ensure this gate was reopened that will add a lot of benefit to the local community."

The Department of Justice, led by former minister Naomi Long of Alliance, had previously consulted with local people after the issue of getting the gates reopened was raised.

The gates have previously been opened for brief periods during the summer months as part of a phased approach.

Local consultation involved the cross-community Twaddell, Ardoyne and Shankill Communities in Transition group, which said yesterday that it welcomed the "re-opening of Flax Street to traffic after almost 40 years".

"We welcome this move as yet another progressive step in the ongoing regeneration of the local area," the group said.

"We hope that this positive move forward will help advance the de-segregation of communities, further regeneration of interface areas and lead to a more normal, inclusive society."