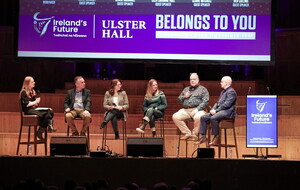 A panel hosted by author Martina Devlin at the Ireland's Future 'Belongs to You' event at Belfast's Ulster Hall. Picture by Kelvin Boyes / Press Eye

THE PEOPLE engaged in the growing conversation about about constitutional change "stretch far beyond traditional stereotypes and caricatures", the chair of Ireland's Future has said.

She said the civic society group was "absolutely guided by the values of the Good Friday Agreement" and dedicated to the "promotion and protection of human rights, equality and fostering mutual respect".

The Dublin-born singer and senator told the 1,000 capacity crowd that more than 100,000 people had attended or watched Ireland's Future events since its formation in 2019.

Ms Black said the group believed "in the imperative of conversation".

"We acknowledge the different perspectives on our constitutional future, but it is an accepted fact, that for several reasons including Brexit, constitutional change is afoot," she said.

"We need to have an approach to dialogue which allows everyone's voice to be heard, agreements to be banked and due consideration given to the important place that all minorities should have in a new society."

She said nobody needed permission to join the conversation.

"Those engaged in this debate stretch far beyond traditional stereotypes and caricatures," the senator said.

Elsewhere during the event, Irish News columnist Patricia MacBride said there was "no legal reason" why the EU could not adopt a policy position on Irish reunification.

"It took a position in regard to German unification, there is a position relation to Cyprus and it has a role in explaining clearly and dispassionately what the consequences are for a reunified Ireland as a member state of the European Union," she said.

Fellow Irish News columnist and educationalist Chris Donnelly said there was "considerable scope" for the island's two jurisdications to learn from each other's experiences when it came to schooling.

He said the success of the Republic's Delivering Equality of Opportunity in Schools programme could provide a "useful guide for tackling underachievement in the north".

"The missing element to date has been the necessary political direction to co-ordinate and lead a programme to allow educationalists to co-operate on a systematic level across the island," he said.

"The next step is for governments, particularly in Dublin, to lead on delivering policies and initiatives to further effect positive change for children across Ireland."

He said such collaborations should not be delayed by "resistance from certain political quarters at Stormont".

Historian Brian Feeney, another weekly contributor to these pages, said partition had been a "calamity" for everybody in the north.

"It has been an economic, societal and political failure," he said.

The former Belfast city councillor said the situation would not change whether there was a Conservative or Labour government in Britain.

"Partition denies you self-determination – people don't have control over their own destiny," he said.

"That's why the Good Friday Agreement is important – it provides the opportunity to vote in a referendum to take control of our own destiny in a new constitutional future – including a guaranteed return to the EU."

He urged the audience to "demand a citizens assembly to plan for a referendum for a new Ireland".

Dublin-born commentator Andre Murphy, who moved to Belfast in 1994, said "Rome rule was over" in the Republic, while north of the border there was no longer "majority unionist domination".

"Vested interests abuse the jurisdictions' different paces and different mechanisms, but we are already united in determination that our shared pasts will never be repeated," she said.

"And of course, we need to build understanding and confidence, but not as strangers. We need to break down years of misinformation, disinformation and plain old censorship, where RTÉ might cut six counties out of our map and BBC Newsline always cut out 26."

Lawyer and Ireland's Future secretary Niall Murphy said policing and justice were key public services which would need redesigned in a united Ireland but noted they are "rarely mentioned in the public discourse".

"It would be highly unusual for a small state of seven million people inhabiting a small land area to operate two distinct legal orders," he said.

"Work must commence, as with so many other areas of public policy, to provide a new beginning to policing on this island – this is yet another reason why the preparation and planning needs to start now."

The event also heard a panel discussion hosted by author and journalist Martina Devlin, where a number of people from a unionist background, including author Claire Mitchell, ex-soldier Glenn Bradley and former Impartial Reporter editor Denzil McDaniel spoke about their changing perspectives.

Around a dozen loyalists staged a small, silent protest across the road from the event.