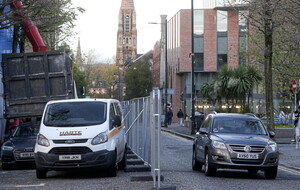 Donegall Street has been shut since October 3. Picture by Mal McCann

A ROAD in Belfast city centre closed due to a fire has partially re-opened more than six weeks on.

Donegall Street has been shut since October 3 when a blaze destroyed buildings and caused more than £3 million worth of damage to businesses along the route.

More than 50 firefighters tackled the fire as it tore through the listed Old Cathedral Building. Built more than a century ago, the site was home to several shops and small creative businesses and studios.

The building had been a hub for the creative community, with several artists and a violin repair business among those to have lost nearly everything.

While some of the shops have been able to fully re-open in the aftermath of the blaze, including the Centra store, some remain shut.

Now more than a month on from the fire and the road has finally re-opened to traffic, however, a section of the route directly outside the building remains sealed off.

It is restricting access for several business owners, pedestrians and some traffic.

A teenager has been remanded into custody on a charge of arson with intent to endanger life.

There is no date yet for a full reopening.