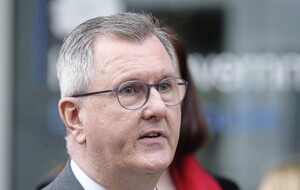 THE SOUTHERN health trust has declined to substantiate Sir Jeffrey Donaldson's claim that he received an apology for making inaccurate public statements about the protocol delaying life-saving heart surgery.

The DUP leader admitted on Monday that what he said last month about cardiac equipment sourced from Germany being held up by the post-Brexit trade arrangements was “not entirely accurate”.

The Lagan Valley MP had claimed that the information had come from a “senior source” within the Southern trust.

A statement from the Southern trust on Monday said following contact with Sir Jeffrey, he "appeared to have been misinformed by sources about the issue on this occasion”.

However, the DUP leader told the BBC that the trust had "apologised that the information I was given was inaccurate".

The Irish News yesterday asked the Southern trust to clarify its engagement with Sir Jeffrey and to make clear whether corporately it had apologised. A spokesperson for the trust said its position had not changed.

Efforts to contact the DUP leader proved unsuccessful though a statement issued by his party press office made reference to "uncertainty about the supply of medicines for both human and pet consumption" caused by the protocol.

"It’s time that Jeffrey Donaldson put this sorry episode to bed once and for all, it doesn’t matter where the information comes from – if you are the one who introduced it into the public domain you should be able to accept that it is wrong and hold your hands up," he said.

"The only person involved in this matter who needs to apologise is him."

"He is now trying to apportion blame to the Southern health trust – I would call on him to stop the spin and take responsibility for this debacle," he said.

"The DUP leader spread misinformation in his eagerness to grab a headline about the protocol and should apologise accordingly."