UVF pair on mural named as killers of father-of-13 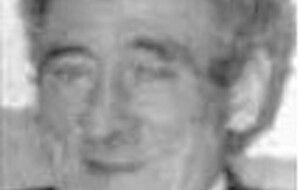 DECEASED UVF member Joe Coggle has been named as one of two men who gunned down a Catholic convert at the height of the Troubles in north Belfast in front of his wife and daughter.

The loyalist, who died in September aged 63, has been celebrated in a new mural in the Shankill Road area alongside fellow UVF man Paul McClelland.

The Sunday World newspaper has named the pair as the gunmen behind the murder of David Braniff in 1989.

Mr Braniff, a father-of-13 who had been raised in the Shankill area but converted to Catholicism after meeting his wife Mary, was murdered at his Alliance Avenue home.

The newspaper reported that Mr Braniff (63) and his wife were saying the rosary when Coggle and McClelland burst into their home and opened fire with handguns, hitting their victim nine times before fleeing. It was described how Mary Braniff had attempted to shield her husband as the UVF killers shot him.

The UVF pair were never charged, but another member of the paramilitary gang was later sentenced to six years for his role.

Fury followed the unveiling this month of the new mural to Coggle and McClelland, which shows the sectarian killers brandishing firearms and is adorned with a poppy wreath and a UVF's Company '1st Battalion' logo.

The daughter-in-law of a 61-year-old grandmother, who Coggle killed when he ran her over in a vehicle in 1986, described it as "really hurtful".

Elizabeth Masterson was fatally injured when Coggle rammed her as she stood with her son and daughter-in-law in the Falls Road area.

Coggle had claimed he had been drinking at the time of the incident.

Five years later he was caught in the Falls area with guns with three other men as they planned a pub shooting, but were stopped and surrounded by armed RUC officers.

Before being sentenced to 18 years for conspiracy to murder and possessing weapons, a judge described Coggle and his accomplices as "ruthless terrorists bent on wholesale murder".

In the Sunday World report naming Coggle and McClelland as his father's killers, Mr Braniff's son Tommy said: "My dad didn't stand a chance. He was shot dead saying his prayers."

"We are determined to get the truth about what happened," he added.