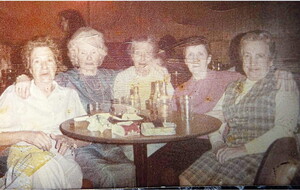 Elizabeth Masterson, middle, with her sisters and sister-in-law on the night she was killed. Picture by Hugh Russell.

A MURAL depicting UVF member Joe Coggle holding an automatic rifle is “really hurtful”, the daughter-in-law of a woman who was run over and killed by the recently deceased loyalist, has said.

The mural, of Coggle and another UVF member Paul McClelland, was recently painted on a wall on the Shankill Road in Belfast.

Elizabeth Masterson, a 61-year-old grandmother better known as Elish, was fatally injured when Coggle drove at her, son John and daughter-in-law Ann.

Her daughter-in-law believes Coggle “got away with murder”. He was sentenced to just 18 months in prison over the 1986 killing but the family was not told ahead of time of his guilty plea and conviction.

Five years later, Coggle was caught along with three others, including McClelland, as they sat in a car on the Falls Road, guns ready to use. He was sentenced to 18 years but released under the terms of the Good Friday Agreement.

“This is really hurtful to me,” Ann Masterson said when told of the memorial to Coggle. “Why should he go up on a wall when my mother-in-law died. It is really hurtful. It has knocked me for six.”

Mrs Masterson added: “I am fuming but what can you do about it, there are memorials all over the place.”

“He should have been done for murder and attempted murder for the rest of us. He murdered her," Ann previously told the Irish News. “We went to the police and told them he came at us direct. We told the police."

She believes the case was covered up because of "who his da was. He was a DUP councillor in the city hall.”

Joe Coggle’s father was a long time councillor, first as a member of the DUP, then as an independent and was twice High Sheriff of Belfast.

Mrs Masterson still regrets she and her late husband John, whose anniversary was yesterday, did not take further action at the time after they found out Coggle was sentenced to such a short prison term.

She also does not fully understand why Coggle is being memorialised in such a public way. His known record was several assaults as a young man, the killing of Elish Masterson and being caught with the loaded guns on the Falls Road.

When the RUC surrounded the car on the Falls Road, one of the passengers was heard to shout: “We are Prods, we are Prods.”

Lord Justice Kelly described the gunmen as “determined and ruthless terrorists who were bent on murder”.

But Mrs Masterson said “he must have got up to a lot more” to be remembered with a dedicated mural.

More recently, Coggle, in a wheelchair and flanked by a masked men, burned a banner suggesting people have a conversation about a united Ireland. It was at a rally against the NI Protocol attended by 3,000 people.