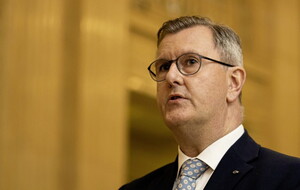 THE DUP is using the protocol as an excuse for not sharing power with nationalists, Sinn Féin deputy leader Michelle O'Neill has said.

The first minister designate accused her party's former partner in government of refusing to accept the outcome of May's Stormont election, which saw Sinn Féin emerge with the largest number of seats.

In an address to her party's ard fheis, the Mid Ulster MLA said Sinn Féin "stood ready to form a power-sharing government" but that the institutions lay dormant due to the DUP's boycott.

She said it was wrong that progress on the issues affecting people's daily lives were "being put on hold".

"At any time, this would be unacceptable but in the middle of a cost-of-living crisis it is utterly disgraceful," Ms O'Neill said.

The Sinn Féin vice-president said the DUP was using the protocol as "cover not to enter power-sharing".

"And the real reason is because as an Irish nationalist, I will be at the helm as first minister – and everybody knows it," she said.

Ms O'Neill accused Sir Jeffrey Donaldson of "scaremongering" over the impact of the post-Brexit trade arrangements on healthcare provision, a reference to the DUP leader's recent claims about the protocol leading to delays in life-saving heart surgery, which were subsequently refuted by two separate health trusts.

She said it was an "irrefutable fact" that the protocol was working and that Sir Jeffrey had been "rebuffed on numerous occasions in the past week about his misleading claims", including "scaremongering about vital medical care".

"Jeffrey doesn't just need a fact-check – he needs a reality check," she said.

"What we all want to see is a deal done to make the protocol work better but for the avoidance of doubt, neither the Assembly or the Executive has any mandate or role in these negotiations," she said.

"So holding back powersharing in the meantime is simply to punish the public – this is reckless and it needlessly polarises our society and politics."

She called for London and Brussels to "propel" the talks to resolve the outstanding issues around the protocol.

New portrait of John Hume to be unveiled at Westminster today