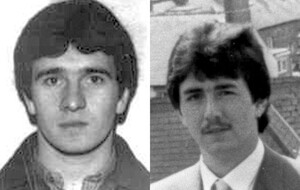 A founding member of the Relatives For Justice campaign group, Mr Carroll lost two brothers during the Troubles.

A native of Armagh, where he was elected as a Sinn Féin councillor during the 1980s, the father of two died at his home in Newry on Thursday.

He was laid to rest at St James of Jerusalem graveyard, Mullaghbrack yesterday.

Mr Carroll helped set up Relatives For Justice group during the mid 1990s.

His brother Adrian was shot dead near his Abbey Street home in Armagh in November 1983.

Four members of the UDR were convicted of murdering the 24-year-old civilian. Three of the former soldiers were acquitted in 1992, while the fourth, Neil Latimer, served 14 years in prison before being released under the Good Friday Agreement.

The murder took place just 11 months after his 21-year-old brother Roddy Carroll was shot dead in a car with Seamus Grew in December 1982.

Members of the INLA, both men were unarmed when they were fired upon by an undercover RUC unit at Mullacreevie Park, Armagh.

The Carroll family maintain they were the victims of a ‘shoot-to-kill’ policy.

They were among six killings by the same RUC unit in north Armagh during 1982 that led to an inquiry carried out by the former Deputy Chief Constable of Greater Manchester Police, John Stalker.

The Carroll family’s campaign for an inquest into the killings was initially led by Mr Carroll’s mother Theresa, and later taken up by the former councillor.

In a statement, the Relatives For Justice group said: “No one has fought for truth and justice in more arenas than Tommy. His two brothers Adrian and Roddy were killed in horrific circumstances - Tommy never gave up the fight.

“Tommy was one of life’s gentlemen. His good humor, honesty and courage were an example to us all.

“We are also thinking today of his late mother Theresa who led the family’s search for truth justice and accountability.”

New portrait of John Hume to be unveiled at Westminster today