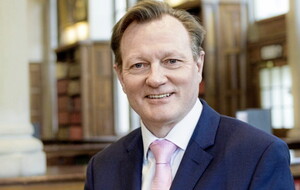 THE PSNI and Queen's University have been unable to provide any information to substantiate claims by Sir Jeffrey Donaldson about recent intimidation of unionist students.

The DUP leader made the allegations in a tweet last week ahead of a meeting with Queen's vice-chancellor Professor Ian Greer, where Sir Jeffrey said he planned to raise concerns about the use of the university's branding on a report co-authored by academic Colin Harvey.

Prof Harvey has been the target of sustained abuse on social media, with police confirming earlier this week that they investigating a number of posts targeting the human rights expert.

In last Thursday's tweet, Sir Jeffrey said "universities should be above partisan politics" before adding that Queen's Democratic Unionist Association had "recently reported on some very worrying cases of intimidation against unionist students".

However, neither the DUP, PSNI or Queen's has been unable to provide The Irish News with any information about the alleged incidents.

Failure to substantiate the allegation of intimidation comes just days after a spokesman for the Belfast health trust said there was "no substance" to Sir Jeffrey's claim that the protocol had led to delays in life-saving heart surgery.

The DUP leader yesterday changed tack, saying his assertion related to the Southern health trust. But a statement from the trust said that while surgery was suspended in August as equipment was sourced in Germany, it made no reference to delays being caused by the post-Brexit trade arrangements.

A statement from the PSNI said: "Police are not aware of any specific issues regarding student intimidation, however, if anyone has information regarding incidents or issues of this nature, they should bring these to police so they can be thoroughly investigated."

In response to a query from The Irish News, Queen's issued a statement from Professor Greer that did not confirm any alleged incidents of intimidation against unionist students.

The university's vice-chancellor said Queen's was "committed to enhancing good relations" in the aftermath of criticism about its "approach to community relations and fairness".

He said at a recent meeting with Sir Jeffrey, the DUP leader had raised "concerns regarding the perceptions from the unionist community."

"I want to address this perception issue and I have asked members of the university management team to request engagement with student groups representing the unionist community and other external representatives of unionism so that we can work to address these inaccurate perceptions in partnership," Prof Greer said.

SDLP leader Colum Eastwood said "false claims" about the protocol had been made repeatedly by unionist and loyalist representatives, despite a majority of businesses supporting the post-Brexit trade arrangements.

"We want to see a positive agreement reached between the EU and British government, but attempts to mislead the public do nothing to help achieve that and only further undermine the credibility of those behind these statements," the Foyle MP said.

“It’s important that our universities are welcoming and inclusive places for all their students and any concerns should be properly addressed, but given the worrying rise in attacks on academics and their work politicians have a responsibility to think before making claims that have not been substantiated, could be misconstrued or heighten tensions.”

Alliance deputy leader Stephen Farry said that against a background of "growing instability and uncertainty" political leaders had a responsibility to be "careful and accurate with their comments".

"This is particularly so regarding claims made with respect to what economic or societal impacts are connected to the protocol and which are not," the North Down MP said.

"Furthermore, Queen's University does provide a shared and inclusive environment for students from all backgrounds – any genuine issues re intimidation need to be substantiated and addressed."

"I don't necessarily agree with everything he says but it is important to respect his academic integrity," he said.