Unionists urged to 'see the opportunity' to work with Rishi Sunak 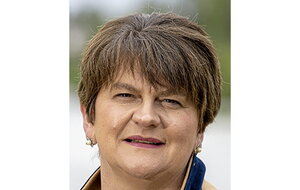 Unionists have been urged to "see the opportunity" to work with new British Prime Minister in waiting Rishi Sunak to find agreement on the protocol controversy.

Fine Gael TD Neal Richmond made the call after it was confirmed that Mr Sunak will succeed Liz Truss as Prime Minister.

The issue of the protocol, which puts a border down the Irish Sea, has angered unionists and the DUP has refused to return to Stormont unless action is taken to remove it.

Although pro-Brexit, Mr Sunak did not automatically back the NI Protocol Bill, which was introduced at Westminster by Liz Truss while she was foreign secretary.

The bill, which is currently going through the House of Lords, aims to scrap large parts of the original agreement.

Mr Sunak is thought to favour doing a deal with Europe to resolve deadlock over the protocol.

However, he pulled out on Sunday.

Days earlier Ms Foster had claimed that Ms Truss made it "very clear on the Protocol Bill and the union, whereas Sunak had not made it a priority".

The News Letter reported that the GB News presenter said last week that she doesn't believe Mr Sunak "has the fight in him" on the protocol issue.

In August DUP Strangford MP Jim Shannon said he was "disappointed" by Sunak's proposals of more talks with the EU to find a solution to the protocol adding “that train has left the station”.

Mr Richmond has urged unionists to consider their options.

"Lets see the opportunity in a new Prime Minister to try and work on an agreed solution to the issue of the implementation of the protocol and give effort to get Stormont back up and running," he said.

"Because that's in everyone's interests, unionists, nationalists or others."

He said the relationship between unionists and Tories has been strained in recent times.

"I think the relationship between the London Conservatives and unionists of all shades over the last couple of years has been a very difficult one," he said.

"We in Dublin stand ready to listen to unionists, to work with unionists, to assuage their concerns when it comes to the protocol and every other issue.

"We want to make this a partnership for everyone, it's not us and them in any regard... and I think this is the nature of British politics, it elects a Prime Minister that everyone has to react to in their own way."

Schools across Northern Ireland urged to 'break the cycle of bullying'

Alex Kane: Rishi Sunak might prove a more dependable ally than his predecessors