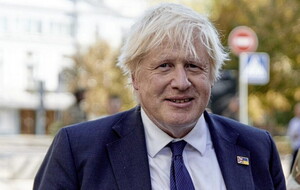 A KEY architect of the Good Friday Agreement has warned relations between Britain and Ireland will be “plunged into the freezer” if Boris Johnson returns as Prime Minister.

Jonathan Powell, who was Labour PM Tony Blair's chief negotiator during the 1998 peace negotiations, said it is necessary to have someone “competent and capable” in Downing Street to get post Brexit talks back on track.

The EU and British governments are locked in a row over the Northern Ireland Protocol, which puts a border down the Irish Sea.

The comments by the former chief of staff came as Northern Ireland Office minister Steve Baker and Westminster Northern Ireland committee chair Simon Hoare wrote a joint article suggesting Rishi Sunak as someone who could deliver a “clear, workable and fair solution” to the ongoing Brexit-linked row with the EU over the border.

Mr Powell said that movement on the Northern Ireland Protocol will “collapse” if Mr Johnson returns to Downing Street.

“Anglo-Irish relations will be plunged back into the freezer,” he told Times Radio.

“Relations with the EU will be even worse.

“There’s quite a premium on having someone competent and capable in Downing Street who can actually get those things done, get a negotiation on the protocol, so you can make it as acceptable as possible to the unionists and restore relations with the Irish government.

“Boris Johnson certainly would not do that."

The former Labour Party official said the UK had become “an international laughing-stock” under the two most recent British governments.

“I think that has serious implications for our standing around the world,” he said.

“I think it has serious implications for the way people see government.

“Competent government is harder than it looks. And I think that both Liz Truss and Boris Johnson demonstrated that incompetent people in No 10 can make a real mess of things.

"A restoration of competent government would at least be one good thing that might come out of this leadership race."