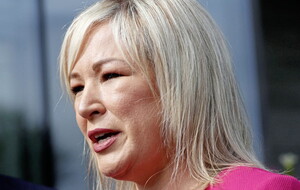 THE secretary of state has reiterated his determination to call an assembly election if an executive is not formed by October 28.

Chris Heaton-Harris's commitment to triggering a fresh poll, with Thursday December 15 earmarked as the most likely date, came as Michelle O'Neill said she stands ready to lead an executive if it is restored at the eleventh hour.

The secretary of state yesterday insisted there would be little hesitation between next week's deadline and the naming the date for what would be the second election this year.

The DUP is preventing the formation of an executive by refusing to nominate a deputy first minister. A delegation of the party's senior representatives, including leader Sir Jeffrey Donaldson, last night held talks in Downing Street with embattled British Prime Minister Liz Truss.

Mr Heaton-Harris had earlier indicated that the EU-UK talks aimed at resolving issues around the protocol are expected to continue during any election campaign, having been put on hold ahead of May's poll.

He said said recently resumed engagement aimed at breaking the impasse over the post-Brexit Irish Sea trading arrangements will continue "no matter what".

The Tory minster also speculated that the outcome of a snap election would be significantly different from May's poll – a point of view that conflicts with most commentators.

"I think there will be actually quite some difference," he said of a forthcoming poll result.

He said "feedback" from members of the public showed people were concerned about the "health service" and "domestic issues", as well as Northern Ireland Protocol.

"I'm always aware as someone who's been elected a few times, and also not elected, once or twice, that you go into an election expecting to talk about one thing, and then all of a sudden, you have to talk about what people are talking about, because that's what they're interested in," he said.

The secretary of state suggested that the talks between Brussels and London would not be paused for any forthcoming election, as they were in the spring.

"The talks between the UK government and the European Union will continue no matter what," he said.

"They might move on – as you have probably detected, I'm a glass half full man on these matters and I know the talks are going ahead in good faith and good spirit and good humour. So I'm confident they will continue."

Asked what might happen if the DUP sought to delay an election by nominating a deputy first minister but immediately resigning from the post, Mr Heaton-Harris responded: "If it was legal, then I'd have to look at that."

Ms O'Neill made her pledge to lead a new executive during a virtual meeting yesterday with Welsh First Minister Mark Drakeford on Wednesday.

She said they discussed "shared priorities in protecting people, businesses and public services".

"Each of the devolved administrations face challenges as a result of this chaotic Conservative government in London who are doing huge damage daily which is impacting us all," she said.

"I briefed first minister Drakeford on the present realities where, six months after the historic election, power-sharing has not been restored because the DUP refuse to respect the outcome."

But DUP MP Gavin Robinson restated his party's position that the problem of the protocol remains and must be addressed before devolution is restored.

"An election just a few months ago told us that every unionist MLA is opposed to the Northern Ireland Protocol, yet the EU has failed to respond to this democratic statement," he said.

"The EU negotiating mandate remains wedded to a protocol which is unacceptable to unionists – this must change."