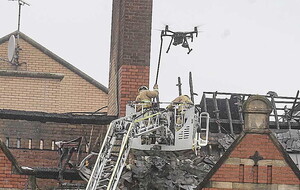 A TEENAGER allegedly started a fire which destroyed buildings and caused more than £3m worth of damage to businesses in Belfast city centre, a court heard today.

Police claimed Patrick Gough was responsible for the blaze that broke out in a coffee shop before spreading to engulf neighbouring historic properties in the Cathedral Quarter.

The 18-year-old, of Victoria Street in Belfast, was remanded in custody on a charge of arson with intent to endanger life.

More than 50 firefighters tackled the blaze as it tore through the listed Old Cathedral Building on Donegall Street in the early hours of yesterday morning.

Built more than a century ago, the site now hosts small creative businesses and studios.

An investigating detective revealed that the blaze is believed to have started in the upper floors of Neighbourhood Cafe before spreading rapidly to other properties.

"The fire caused significant damage and destroyed the buildings as well as having a huge impact on businesses nearby in the city centre due to closures," she said.

"The early estimate of the damage is around £3m, although this is expected to rise considerably as the extent of the victims' losses becomes known."

The court heard police viewed CCTV footage which showed a male climbing down scaffolding on the side of the Police Ombudsman's building at around 5.20am.

As the emergency services fought to control the outbreak, a man walked into Writer's Square to observe the fire.

"CCTV operators were able to confirm this was the same male seen climbing down the scaffolding in earlier CCTV," the detective said.

Gough was then arrested on suspicion of carrying out the arson attack.

He is further charged with burglary and drugs offences on the same date.

District Judge Mark McGarrity was told three bottles of spirits valued at £96 were stolen during an alleged break-in at a nearby restaurant in St Anne's Square.

The bottles of alcohol and a small quantity of cannabis were recovered during searches at Gough's home address, the detective claimed.

"The height of the case against him is a clothing description," Mr Mulholland insisted.

"It's not a forensic connection, it's not DNA."

During cross-examination, he put it to the detective: "We don't even know whether it was an arson or not."

He remanded Gough in custody, to appear again by video-link on November 1.