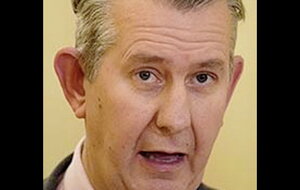 THE DUP's Edwin Poots has warned of a Good Friday Agreement "funeral" if unionist concerns over the Northern Ireland protocol are not resolved.

The agriculture minister repeated that his party would not return to Stormont until issues were resolved.

The DUP withdrew from Stormont's institutions in protest at the post-Brexit trading arrangements.

Speaking to RTÉ, he said unionist anger over the protocol meant that the cross community support needed for the 1998 peace deal no longer existed.

While a Northern Ireland Protocol Bill is proceeding through Parliament, he said it could still take months to come into law which would be "entirely unacceptable" for his party.

"That's the circumstances we find ourselves in, and therefore whenever Ireland invites President (Joe) Biden to come over for the 25th anniversary of the Belfast Agreement in Easter next year, unless something radical happens and the EU decide to become a bit more realistic, then he'll be coming over to the funeral of the Good Friday Agreement, not to a celebration of its 25th anniversary," he said.

With talks between the EU and UK to resume this week, both the Taoiseach Micheál Martin and British Prime Minister Liz Truss have called for Stormont to be restored immediately.

Meanwhile, a new book on the Trump Presidency has claimed he found the topic of Northern Ireland deeply uninteresting.

The exchange is reported in Confidence Man, from the New York Times journalist Maggie Haberman.

In a meeting with Theresa May, it is reported that Mr Trump "appeared to get bored" when the topic switched to Northern Ireland and the conversation was steered to an offshore windfarm near one of his Scottish golf courses.

Based on more than 200 sources, including Trump himself and former aides, the books charts his life from a New York business mogul through to his outspoken post-Presidency years.

In his usual style, Trump has criticised the release as "another fake book" which contains "zero fact checking".