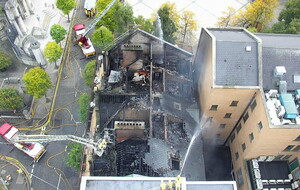 Handout photo issued by Northern Ireland Fire and Rescue Service of firefighters at the scene of a blaze at a historic building in Belfast's Cathedral Quarter, where more than 50 personnel have been involved in the operation at Old Cathedral Building on Donegall Street

As the reality of Monday’s Donegall Street fire sinks in, business leaders have questioned if lessons have been learned since the Primark blaze four years ago.

A reduced cordon remains in place at the scene as structural engineers assess the damage to the Old Cathedral Building.

The roof was completely gutted by the fire and although the red brick façade remains, there is no guarantee it won’t collapse on to the street below.

A normally busy Centra next door remains shut as debris was cleared away while staff from the evacuated Police Ombudsman office on Writers Square are now working from home.

At a court hearing on Tuesday morning, police said 18-year-old Patrick Gough started the blaze and that the total cost of the damage has been estimated at over £3m.

The building had been a hub for the creative community, with several artists and a violin repair business among those to have lost nearly everything.

A fundraising campaign for artists in two of the studios has now raised over £15,000 since Monday.

Roger Pollen is head of the Federation of Small Businesses, which has premises just two buildings away from the damaged area.

He said lessons learned from the Belfast city centre Primark fire in 2018 needed to be put into action fast.

More than 50 firefighters are tackling a blaze at Belfast's Cathedral Quarter..Crews were called to the Old Cathedral Building, which is home to a range of businesses and groups, at 05:37 BST on Monday.Eight fire engines were dispatched from Belfast, alongside a command unit from Lisburn and two fire aerial appliances.

“The biggest concern is the uncertainty it causes for all those businesses. They will work their way through it and help is forthcoming, but all of that is effectively temporary,” he told the Irish News.

On the 2018 Primark fire, he said the city centre had still not returned to normal despite the huge resources available to such a major company.

“It’s a mess. The learning from Primark is that whatever we’re going to do, we need to get there faster,” he said.

“Remember how long everything was spun out before any solutions were tabled for that.

Primark is to reopen at Bank Buildings in Belfast city centre in November four years after a fire almost destroyed the building. Picture by Hugh Russell

“If you look at the amount of businesses that went under along Royal Avenue. Places like Dawsons Music because they lost so much footfall.

“That was the collateral damage from Primark and we’re going to have to make sure we don’t see that again."

The concerns were echoed by the Belfast Buildings Trust charity.

A statement read: “What next for this vital part of Belfast’s streetscape? Will it be restored, as in the excellent work at Primark? Or will we, once again, face the seemingly inevitable calls for its demolition and later marketing as a development opportunity?”

“We’re all still in a state of flux to put it bluntly," she said.

“I can only speak for myself, but there is still complete and utter shock. I kept waking up in the middle of the night and thinking ‘oh my God’ and realising the office is gone.

A Belfast City Council spokesperson said: “Our building control team has attended the site of the fire to assess the building under the dangerous structures legislation. We are working with the owner and their representatives to have the building made safe as quickly as possible.

“Council officers are working with Destination CQ to help identify any vacant buildings within the city centre which could be used as temporary spaces for the businesses affected by the fire. We are also exploring how we can support the businesses and artists with practical help around insurance and legal issues.”