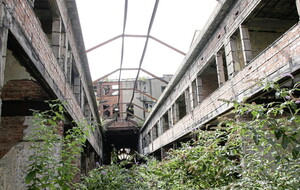 As fire crews tackled the outbreak at the Old Cathedral Building on Donegall Street yesterday, many will have been reminded of another high profile blaze a short distance away.

In 2004, the North Street Arcade building was largely destroyed by arsonists and it remains in a derelict state today.

First built in 1936, the art deco shopping mall brought some much-needed style to a socially deprived part of the city.

With three floors and individual retail units, it had a striking glass roof in a curve shape and a tiled walkway.

It fell into a state of decay after an IRA bomb detonated prematurely in 1976, killing two civilians and the two bombers responsible.

A modest revival in the 1990s saw the building awarded B1 listed status, with low rent attracting the creative community which would include the offices of the Cathedral Quartet Arts Festival, a record shop and a café.

While the fire in 2004 destroyed the glass roof and floor, the basic structure of the arcade remains intact.

At the end of Donegall Street, another listed property blighted by vandalism and neglect in recent years is the Assembly Rooms.

As Belfast's oldest public building, campaigners in July urged Belfast City Council to buy it for public use.

Over the past two decades, various investment plans have been in motion to bring both of these decaying properties back to life.

The London company Castlebrook investments is currently trying push through the £500m Tribeca scheme, seeking to revamp 12 acres of properties and land between Royal Avenue and Donegall Street.

In July, the company said it was "frustrated" by the lack of progress with debts growing into the tens of millions.