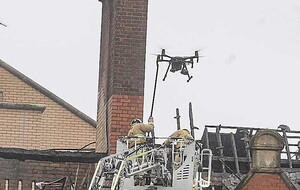 Business owners in Belfast have spoken of their devastation after a fire gutted a listed building in the Cathedral Quarter.

Emergency services were alerted to the blaze at the Old Cathedral Building on Donegall Street just after 5.30am.

Images showed huge flames at the top of the building before daylight, with over 50 firefighters attending along with eight fire appliances from Belfast and two aerial appliances.

By 9am, the fire had reduced but thick plumes of smoke were still visible from the top of the building as hundreds of students filed past on their way to the new Ulster University campus.

With a café, hairdresser and a garment alterations business on the ground level, the three upper floors were a a hub for several businesses in the creative community.

Aidan Mulholland ran a violin repair business on the top floor for over 30 years and estimates he has lost up to £60,000 worth of stock.

"All that stock just doesn't exist anymore. This isn't something you can buy in one go, it's accumulated over years," he told the Irish News.

"I've been working from home for about a month as they were working on the roof and asked me to move out.

"I wasn't covered for what happened there so, financially, it's a big disaster. All I can do is look at the positives, no one was injured and I still have a couple of small hand tools to do repairs."

Now operating his repair business from home, he said customers could still reach him through his website - Mullhollandstrings.com.

The owners of the Neighbourhood cafe on the ground floor posted on Twitter: "With great sadness we will be closed until further notice due to a fire in our building. Thanks for all the messages of support. We’ll be back soon."

Next door, the owners of Perfect Fit said the news was "devastating" while the owners of the Hair Friendly salon were left "very tearful."

Illustrator Elly Makem (28), from Belfast, was part of a freelance studio collective on the second floor.

"I actually woke up to several missed calls from people I hadn't heard from in months," she said.

"I have several grands worth of equipment in there. I have a new iMac and several pieces I haven't submitted to clients yet.

"Every sketchbook I've ever drawn in, every piece of equipment I've bought over the last ten years."

Looking forward, she said: "We're all trying to band together this morning. People have been really lovely and have offered temporary office space for us to work in.

"Right now, we're just trying to understand today. I don't even know about tomorrow yet."

Elly Makem at the scene of the fire in Donegal Street Belfast.More than 50 firefighters are tackling a blaze at Belfast's Cathedral Quarter.Crews were called to the Old Cathedral Building, which is home to a range of businesses and groups, at 05:37 BST on Monday.Eight fire engines were dispatched from Belfast, alongside a command unit from Lisburn and two fire aerial appliances.Picture by Hugh Russell.

A man (18) has been arrested on suspicion of arson.

Tina Calder operated the Excalibur Press business from the building along with five staff who are now working from home remotely.

She was alerted to the fire around 6am by her brother who works as a security guard.

"By the time I'd arrived by 6.30am, the left hand side of the building was on fire and it was going upwards," she said.

"The whole building and roof was then engulfed and I just stood here watching it get worse and worse.

"We have about 12 computers, a studio with lights, my entire 25 year journalism archive was in that building. Every piece I've ever written. It's just heartbreaking."

Jennifer Mehigan (33) from Co Cork had been working as an artist in the building for a year.

Aidan Mulholland ran his violin repair business in the Cathedral Building for 30 years.

"Most of us were creative or charity based businesses, and there was also a meditation centre. It was one of the nicest buildings for artists as the rent was kept affordable," she said.

On first seeing the damage, she said: "I was in shock. Mostly because my mum's house burned down a few years ago so it brought up old feelings. But it was also the overwhelming loss of sketchbooks I made 15 years ago. My whole career of artwork is in there and to lost it all is just incomprehensible really."

SDLP councillor Carl Whyte visited the scene to offer support and said that temporary accommodation was available for businesses at the Cathedral Quarter Business Improvement District.

“This is one of the most historic parts of our city centre and it’s devastating to see this building damaged as a result of this blaze," he said.

A 19th Century Cello thought to be worth £10,000 that was lost in the Cathedral Building blaze.

"There has been much discussion about the need to revive this part of our city in recent months and this is the last thing the area needs.

“I’d like to pay tribute to the work of the fire service who have been working tirelessly at the scene from the early hours of Monday morning. The council will work with all those who were based at the building to find emergency accommodation as soon as possible and to address the fallout from this fire.”

A grade B1 listed building, the Cathedral Building was first constructed in 1901-2 for the tea merchant F.R Lepper.

According to information held by the Department of Communities, the large red-brick building was made with sandstone bands, large (vaguely Flemish) gables, tall chimney stacks and a high pitched roof. 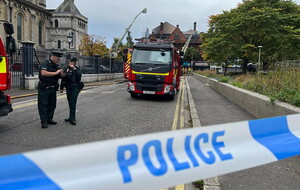