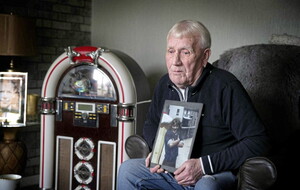 Hugh McCartan talks to the Irish News about the death of his brother James. Picture by Hugh Russell.

THE brother of a Belfast man murdered by a loyalist gang 50 years ago today has told how he needs to inform the police every time he visits his grave.

James McCartan, a Catholic from the Markets area of the city, was 21 when he was abducted from the Park Avenue Hotel in east Belfast on October 3, 1972, where he had been celebrating an upcoming wedding.

Having worked as a forklift driver in the Ballykinlar Army base in Co Down, he was tortured that night in a so-called romper room in east Belfast where loyalist paramilitaries notoriously subjected victims to sadistic beatings.

His body was later found dumped in waste ground in the Mersey Street area after he had been shot in the head while he was hooded with his hands tied together.

Speaking to the Irish News ahead of the anniversary of his brother’s death, the memory is still raw for 73-year-old Hugh McCartan.

A framed picture of a smiling James sits in the living room of his house in the Markets.

“It’s just bringing back memories of what he went through, it’s terrible,” he said.

“He was dead on. He used to come here to see me. He worked all his life and he was never idle."

In recent years, he said he has received two death threats warning him to stay out of Holywood where his brother is buried.

The family have plans to visit his graveside, but say they have to inform the police beforehand as Hugh's life may be in danger.

“A couple of years ago I asked someone in Holywood what happened to Jimmy, they said ‘I can’t talk about it, they’ll shoot me’”, he said.

Albert ‘Ginger’ Baker, a Royal Irish Ranger who AWOL and a member of the UDA was the only person ever convicted of the murder.

Having apparently suffered from a crisis of conscience, he handed himself into police in Wiltshire in 1973.

As well as confessing to the McCartan murder, he also said he was responsible for 11 armed robberies and the killings of Paul McCartan (no relation), Philip Faye and involvement in the death of Eugene Heenan.

Serving 18 years in prison, he would also go on to make highly publicised allegations of collusion between the RUC and the UDA.

This included claims that he committed terrorist acts with a prominent member of the UDA who was an informant working for a senior army intelligence officer.

The Historical Enquiries Team has previously stated an investigation found no evidence of collusion between the RUC and UDA, or provided any new investigative opportunities in relation to the McCartan murder.

Hugh’s son Brian (50) was only months old when his uncle was killed.

“I can picture Jimmy in my head and I’ve never seen him. I was at his funeral when I was only a couple of months old,” he said.

“I know he’s there and he hasn’t rested. It’s ripped my dad apart, he nearly drank himself to death.”

Hugh adds: “I’d drink three bottles of vodka a day here. Morning, noon and night. I once woke up in intensive care without knowing where I was.”

Brian said: "He still gets counselling. God forbid if anything happens to him, I’ll continue to fight to get the truth. To expose them, because it’s stinking.”

The truth, the family still firmly believe, is that Baker was a British state agent.

“If they (the authorities) do tell the truth they’ll open a can of worms for all the other murders. But we just want an apology to admit that there was collusion," said Brian.

This week, a long-running civil case against the Ministry of Defence concerning allegations of state collusion with loyalist paramilitaries had been due to resume in the High Court.

It is understood the MoD is attempting to have the case thrown out for lack of evidence, with the next hearing now due in December.

The family of Eugene Heenan (47), a father of five from Andersonstown, first started legal proceedings in 2015 against the MoD and the retired British Army general Sir Frank Kitson.

They allege that Kitson and others knowingly placed state agents in loyalist paramilitaries, while being “reckless” as to whether they would commit murder.

Mr Heenan was killed on February 1, 1973 when a masked gang threw a hand grenade into a minibus he was taking to work, with Baker claiming he was involved.

His family solicitors have alleged that army units like the Military Reaction Force (MRF) had been “involved with paramilitaries and took part in a number of murders”.

They have now called for disclosure about all the information the MoD have on Baker, as well as the names of all those who served with the MRF or other undercover units.

For his own part, Kitson has always maintained that “low intensity operations” never sanctioned illegal action, advocated “the suppression of legitimate dissent” or came to an interference by the military in civilian life.