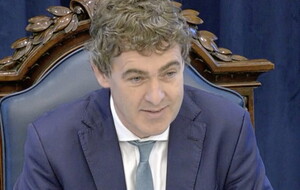 THE SON of the late Rev Ian Paisley has said talk of a united Ireland is not as easily dismissed as it once was and that Brexit bears much of the responsibility for transforming attitudes.

His comments were made yesterday as the Seanad held its first meeting of a public consultation looking at the constitutional future of Ireland.

Chaired by Senator Mark Daly, the meeting heard from a number of young people, members of the Seanad and contributors from both sides of border and beyond about their hopes, aspirations, and priorities around potential constitutional change.

Rev Paisley, who is a minister at Oulton Broad Free Presbyterian Church in Suffolk, told the committee that "the Emerald Isle becoming a single political entity is not so easily talked down as it used to be".

"The chief cause of this is, I believe, uncertainty over Brexit and the trade border that now exists between Northern Ireland and Great Britain," he said.

The cleric said his "heart is fixed and can't be won" and that nationalism's effort to win over moderate unionists to the idea for new Ireland was a "Herculean task". However, he said the same of unionism's efforts to convince nationalists of the merits of the union.

Elsewhere, Mr Cushnahan lamented the absence of "stable political institutions and reconciliation" in the north and proposed an amendment to the St Andrews Agreement to ensure devolution could not be vetoed. He also called for clarify on the conditions for holding a border poll.

"Without stable institutions, it is difficult to understand the logic of holding a referendum on Irish unity," the former Fine Gael MEP said.

Writer and campaigner Emma deSouza said there was "nothing divisive about dialogue".

She proposed the reformation of the Civic Forum, in tandem with an all-island citizens’ assembly to coincide with next year's 25th anniversary of the Good Friday Agreement.

"With rumblings of political unsteadiness still reverberating after Brexit, the much-needed stability offered by meaningful engagement and public consultation cannot be understated," she said.

“The future of a new Ireland belongs to us all and everyone’s voice is important as this dialogue progresses and continues," he said.

"It is clear that there is a growing, inclusive and energetic conversation taking place across our island about how to secure a future which improves everyone’s lives."