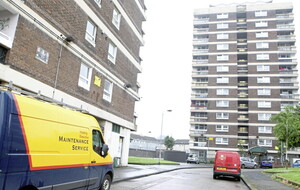 HUNDREDS of families are unable to move in to their Housing Executive homes due to a backlog of work stretching back months.

Close to 20,000 repair jobs, including heating, were also listed by the Executive as outstanding at the end of July, though the organisation claims those numbers do not reflect reality on the ground.

A total of 810 change of tenancy jobs were not completed by their target dates over the three months of May, June and July. All remained outstanding at the end of that period.

The failure to complete the work - costed at £3.5m – meant the new tenants were not able to move in to the homes.

According to the Housing Executive, this listed number of maintenance jobs has dropped to 17,000 but officials added these are not, in fact, actual repair work needing to be carried out.

They are listed on forms as repair maintenance when planned statutory heating and electrical inspections are due to be carried work, according to the Executive. It said there is a backlog of approximately 3,000 actual repair jobs.

In a statement, the Executive said there were 3,327 outstanding jobs covering heating and other maintenance work and 327 where a new tenant is unable to move into a home.

Details of the backlog have emerged amid reported turmoil both within one of the largest landlords in Europe and in its relationship with outside contractors.

Directly employed workers responsible for maintenance work are on strike and have served notice they will remain out for another four weeks beginning next Monday.

“Based on the experience of both current and previous strike actions, the continued action will result in further disruption to our response maintenance services in three areas: Craigavon, Coleraine and North and West Belfast,” the Housing Executive said.

“During this period, we will carry out emergency only repairs within these areas.”

Contractors who carry out work for the Executive remain unhappy amid claims management has failed to implement a recent deal that would give them an uplift to cover rising labour and materials costs.

“This is inaccurate,” the Executive said.

“Following Board approval in August for uplifts to response maintenance contracts we've been working with our contractors to finalise the necessary documentation,” a spokesperson added.

“This is now with the contractors to sign. Once completed, the additional payments will be released. Therefore, we are not aware of any issues with contractors on this matter.”

According to leaked documents, of the 810 outstanding change of tenancy jobs at the end of July, 217 were due to be completed by the end of May.

The large majority of those jobs outstanding, 650, were in Belfast and Lisburn and Castlereagh. The total cost to carry out the work was estimated at £3.5m.

Just over 19,000 response maintenance jobs were listed as outstanding at the end of July, with just over 6,000 due for completion two months previously.

In its statement, the Executive said: “We maintained services for tenants throughout Covid-19 thanks to the work of our teams and our maintenance contractors.

“Over this period and subsequently, however, there has been a small build up of maintenance work, including a backlog of repairs, heating maintenance and also work associated with a change of tenancies.”

These are repairs “which have fallen outside our allocated completion timeframe. For context, from March 2021 to April 2022, we completed 313,534 repairs across our 83,788 homes”.

“The current backlog therefore represents 1.06 per cent of the repairs work that we carried out last year.”

Management has been “actively working with our contractors to see this backlog cleared as soon as practicably possible”, according to the Executive.

“We are concerned, however, that the ongoing industrial action will add to any existing backlog in the three areas where strikes are taking place. “