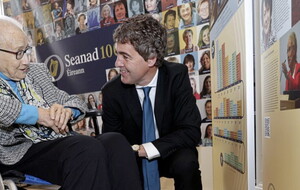 AN exhibition highlighting the role that Seanad Éireann has played in providing a platform for unionist and Protestant voices was launched yesterday in Dublin.

'Northern Voices' is the third exhibition to mark the Seanad100 commemorations and was unveiled at Leinster House.

Ian Marshall, the first Ulster Unionist elected to the Seanad in almost 100 years, Martin McAleese, husband of former President Mary McAleese, and who assisted loyalist groups to participate in the peace process and former Supreme Court justice Catherine McGuinness, were among the guests at the launch.

The exhibition looks at unionist and Protestant voices in the Seanad after they found themselves in the minority following the foundation of the new state.

It features 26 current and former members from the first to the current Seanad and also has the signatures on display of the first women of the Seanad - Alice Stopford Green, Eileen Ellen Costello, Countess Ellen Desart, and Jennie Wyse Power.

An image of the Senate Casket, commissioned in 1924 by Senator Stopford Green as a gift to the first Senate of the Irish Free State, is also included.

Senator Mark Daly, cathaoirleach of Seanad Éireann, said: "The presence of northern voices in the Upper House, both nationalist and unionist, has been critical in ensuring representative and inclusive debate, particularly during the Troubles and since the Good Friday Agreement.

"These contributions have provided insights and understanding that have not always been present in the Dáil.

"As debates around Brexit, and the relationship between Ireland, Northern Ireland, the United Kingdom, and the European Union continue to evolve, the role of the Seanad in this area will continue to grow."

Mr Marshall said the Seanad’s "meaningful inclusion of northern voices over the past 100 years has been an important one, as it facilitates open, inclusive conversation".

"It was a privilege to represent the voices and concerns of people across the island of Ireland during my time here," he said.

Mr McAleese said it was "wonderful in its centenary year that the Seanad has chosen to showcase many of the northern voices who have sat in the Seanad chamber over the past 100 years, lending their perspective to facilitate shared understanding".

20mph zones ‘reduced casualties and collisions by 2% in Belfast'